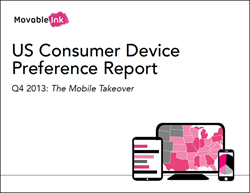 “This quarter’s report shows that we are in the midst of a mobile takeover,” said Vivek Sharma, Co-Founder and Chief Executive Officer of Movable Ink.

Americans are ditching desktops, viewing marketing emails on their smartphones and tablets more than ever, according to a new report from Agile Email Marketing technology provider, Movable Ink. The data reveals that 65% of marketing emails were opened on a smartphone or tablet in the fourth quarter, up four percentage points from the previous quarter, while desktop opens slowed to a new low of 35%, down from 39% in the previous quarter.

The Movable Ink “US Consumer Device Preference Report: Q4 2013” also reveals that mobile dominated the 2013 holiday season in email opens. Smartphones and tablets accounted for an average of 71% of all marketing email opens on Thanksgiving, Black Friday, Cyber Monday and Christmas.

For the first time, even the traditionally most desktop friendly states were more prone to opening marketing emails on their mobile devices than on desktop computers. While Maine and Vermont maintained their positions as the top two states for desktop use, the percentage of total emails opened on desktops in these states declined to under 50%. Texas remained the most smartphone friendly state, now with over 57.60% of emails opened on a smartphone, with Mississippi (57.27%) and Indiana (56.22%) following close behind.

“This quarter’s report shows that we are in the midst of a mobile takeover,” said Vivek Sharma, Co-Founder and Chief Executive Officer of Movable Ink. “In the new year, we expect marketers to continue to place high priority on mobile optimization which will allow them to better engage consumers who are on-the-go with relevant, real-time offers.”

The quarterly report provides deep insight into the popularity of various devices, examines differences in consumer engagement based on the devices they use, and shows how device preferences vary across the nation. Unlike other studies, this data set exclusively includes results from large, enterprise B2C marketers.

The full report is available as a free download here.

About the Movable Ink US Consumer Device Preference Report
The US Consumer Device Preference Report is based on data collected through Movable Ink’s Agile Email Marketing platform between October 1 and December 31, 2013. The data reflects aggregate statistics across Movable Ink’s customer base, which includes more than 100 enterprise B2C marketers from the retail, travel, financial, media, and telecommunications industries. Because determining email opens requires images to load, the percentages for some device types and platforms might be over or underrepresented.

About Movable Ink
Movable Ink is the leading provider of Agile Email Marketing technology. Since the channel's inception, email has been frozen in time when a marketer hits the "Send" button. With Agile Email Marketing from Movable Ink, email can now be dynamically updated in real-time based on each recipient's time, location, device, and social context at the moment of open. Hundreds of innovative brands such as American Eagle Outfitters, Seamless, Lilly Pulitzer, and Finish Line use Movable Ink to enhance customer engagement and increase marketing ROI. The company is based in New York City and is backed by Intel Capital, Contour Venture Partners, Metamorphic Ventures, ff Venture Capital, Kima Ventures and email veterans such as Bob Pittman, Andy Russell, Josh Baer, and Alan Laifer. For more information, visit http://www.movableink.com and http://www.pinterest.com/movableink.