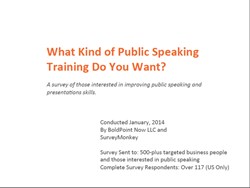 Storytelling is still the greatest way to engage and win over audiences, yet so few business presenters know how to craft a simple, powerful story."

The ability to engage audiences with a meaningful story is what most presenters and public speakers fear, according to a new business survey.

They survey, conducted by presentation training firm BoldPoint Now, was sent to targeted business individuals and those interested in better presenting and sales skills.The survey was designed to understand what business peoples’ fears and training needs were when it came to presenting and speaking in public.

It’s All About The Story

By far, the biggest finding was the need to “know how to tell a story.” Over 33 percent of respondents wanted training for this, while 46 percent said, “they were not natural storytellers.” In addition, some 44 percent said they needed training that helped them “connect and engage with audiences.”

“We were surprised that stage fright and poor slide design scored much lower than the ability to tell a story and to engage audiences with meaningful content,” said Robert Chew, president, BoldPoint Now, based in Los Angeles. “This survey shows that if presenters learned just a few basics of story structure, point of view, and personalization, many would instantly become stronger presenters and communicators, and many of their natural fears would be tamed.”

The survey, completed by 117 individuals, found those who responded as either “professional speakers,” and those thinking of becoming professional speakers (56 percent of respondents), nearly half, or 47 percent, said they needed help with storytelling and engaging audiences, too.

Have Something Meaningful To Say

“We know that having a strong point of view and a strong story to tell are major factors in creating confidence on stage, in front of customers, or while giving a speech,” said Chew. "When you know your story and your key message, it naturally makes for more powerful presenting."

Not surprisingly, when it came to designing better slides 25 percent of respondents said they “had no sense of design” and 31 percent said they didn’t “know how to use PowerPoint” or any “slideware,” or knew how to “use basic animation/transition tools.”

“It’s astonishing that after twenty years since Microsoft PowerPoint was first introduced to the business world there's such a large percentage of presenters that still do not know the basics of how to use it,” said Chew. It is estimated that over three million PowerPoint presentations are giving each day in the United States, according to Microsoft.