With 450,000 people displaced and nearly 1,000 dead from warring parties, Food for the Hungry is staying in South Sudan to help prevent gender-based violence against girls and women. 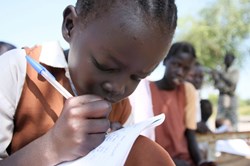 A girl in South Sudan works on her homework.

Often in shelters where overcrowding and competition for resources means young girls and boys will be used as a bartering system for goods.

Nearly five weeks of violent conflict throughout South Sudan has left at least 1,000 dead, 450,000 displaced and the climate of individual communities in constant turmoil and change. In the capital city of Juba, violence has greatly subsided. However, many rural areas, where Food for the Hungry (FH) works, have continued fighting.

Since 2001, FH has worked in South Sudan to improve education, water and sanitation, hygiene education, and local agriculture. Many non-government aid organizations (NGOs) have temporarily left the country until violence decreases. FH emergency staff are remaining on the ground to continue work. Beth Allen, FH Staff, said, “The beneficiaries have very fragile trust with NGOs, because they've seen so many come and go. Having emergency staff is a big statement to them that there is still hope.”

The FH emergency response unit advises on appropriate response strategies to the dynamic needs in the area. In particular, the team is working to protect women and girls who face an increased risk for gender-based violence.

“Civil unrest and violence have a particular way of targeting women and children. Violence almost certainly means people will be displaced, often in shelters where overcrowding and competition for resources means young girls and boys will be used as a bartering system for goods,” said Shawnee Ziegler, gender-based violence expert of FH’s Emergency Response Unit. “Rape and abuse are weapons of violence that both sides use in order to instill psychological harm, and because women and girls are often seen as objects, to be used, sold and discarded it is imperative that any emergency relief programs take into account protections and gender violence concerns.”

FH is working to keep girls in school and communities safe through education and planning.

Founded in 1971, Food for the Hungry provides emergency relief and long-term development programs with operations in more than 20 countries to help the world's most vulnerable people. Learn more by visiting http://www.fh.org. Social connections include http://www.facebook.com/foodforthehungry and http://www.twitter.com/food4thehungry.