Vygon (UK) Ltd will be supporting two new charities through its charity committee in 2014 - the Timmy Mason Trust and Teckels Animal Sanctuaries. 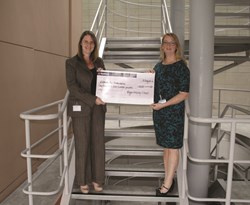 We’re now busy planning our activities for 2014 and we’re looking forward to a bumper year.

Vygon (UK) Ltd will be supporting two new charities through its charity committee in 2014 - the Timmy Mason Trust and Teckels Animal Sanctuaries. This is in addition to Macmillan Cancer Support and Wiltshire Air Ambulance which it has been supporting since 2011.

Vygon UK has a long history of supporting charitable organisations, and with the move to its new Swindon HQ in 2010 it decided to formalise the process so the Vygon Helping Others charity committee was created. Their goal is to get employees helping others through traditional fundraising activity and also through doing charitable work themselves.

Initially they concentrated on a few events that have since grown, including taking part in the World’s Biggest Coffee Morning run by Macmillan, and Wiltshire Air Ambulance’s It’s a Knockout competition. As employees have become more active they also have taken part in local Santa runs, sponsored skydives, half marathons, triathlons, and two people have even climbed mountains to raise money.

Vygon supports this activity through match-funding, and recently has added “time and talents” in order to reward people who help charities in person rather than through fundraising.

In 2013 it was decided that two further local charities would be added, and staff were asked to nominate then vote on their preferred choices. The winners were the Timmy Mason Trust and Teckels Animal Sanctuaries.

Teckels Animal Sanctuaries is a small registered charity totally dedicated to ending cruelty to animals in the UK and their sole focus is to provide a safe and loving sanctuary for dogs and cats who find themselves in need of help.

Louise Cannon, Chair of the Vygon Helping Others charity committee said, “It’s great to see that our charity work has become so well established that we can bring in new recipients. We’re now busy planning our activities for 2014 and we’re looking forward to a bumper year.”

Alla at the top of Mount ToubkalCharity climb