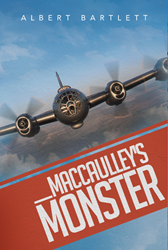 I’ve always been fascinated with Howard Hughes and the production of the ‘Spruce Goose'. Although it was never completed, I’ve remained curious as to why a similar project was never attempted.

The popularity of conspiracy theories is frequently rooted in the belief that governments are not transparent in their actions. This belief was the basis for author, Albert Bartlett’s new World War II thriller, “MacCaulley’s Monster.”

“MacCaulley’s Monster” is the fictional tale of a mysterious unidentified aircraft shot down near the English Channel in 1943.

“I’ve always been fascinated with Howard Hughes and the production of the ‘Spruce Goose,’” Bartlett said. “Although it was never completed, I’ve remained curious as to why a similar project was never attempted. It’s not outside the realm of possibility to imagine that a similar secret project was attempted.”

In the novel, a giant aircraft named ‘MacCaulley’s Monster’ is shot down on its maiden voyage. Since nothing about the project was public knowledge, the corpus of the story involves unraveling the mystery surrounding the plane’s existence from authorization to its eventual demise.

About the Author
Albert Bartlett is a retired high school English teacher and former statistician for the University of Colorado football team. He has always had a keen interest in history and World War II. In preparation to writing “MacCaulley’s Monster”, Bartlett read more than 200 WWII books to give his own novel an accurate historical basis. Bartlett currently resides in Gig Harbor, Washington.