Edward A. L. Roberts is the father of modern-day shale fracking by inventing exploding torpedoes dropped in drilled wells. 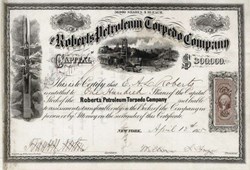 There are only three known certificates signed by Edward A. L. Roberts to exist

Prior to the invention of the oil well torpedo, oil wells produced only small quantities of oil for a short time. They had to be redrilled due to the build-up of paraffin and clay deposits. It was not until January 28, 1865 when Col. E.A.L. Roberts successfully discharged his eight pound torpedo, so that oil production could be increased significantly. The torpedoes, which were lowered into the drilled wells, were filled with gunpowder, and ignited by a weight dropped along a suspension wire onto percussion caps in the torpedo. In later models, the gunpowder was replaced by nitroglycerin. Oil well production increased over 40 fold as a result of Roberts’ invention. Modern torpedoes are still used today.

In February, 1865 E.A.L. Roberts and his brother Walter formed the Roberts Petroleum Torpedo Company. Roberts was granted a patent that gave his company a virtual monopoly on all types of torpedo used in the oil industry. This patent was vigorously fought by both oil exploration companies and other would-be torpedo producers. In August 1866, the United States Supreme Court confirmed the Roberts’ sole right to the patent.

Roberts charged $100-200 per torpedo as well as a royalty amounting to 1⁄15 of the increased oil production. To avoid paying the exorbitant fees, an owner of a well would often hire men who illegally produced their own torpedoes and used them at night—the practice giving rise to term "moonlighting". Roberts spent $250,000 to protect his patent from the "moonlighters" by hiring the Pinkerton National Detective Agency and filing numerous lawsuits. Roberts' torpedo patents expired in 1879.

Scripophily (scrip-ah-fil-ly) is the name of the hobby of collecting old stock and bond certificates. Certificate values range from a few dollars to more than $500,000 for the most unique and rare items. Tens of thousands of Scripophily buyers worldwide include casual collectors, corporate archives, business executives, museums and serious collectors.

Stock and bond certificates are collected because of their historical significance, beauty and artwork, autographs, notoriety, as well as many other factors. The supply of new certificates reaching the collector market has been substantially reduced due to changes in state laws and stock exchanges rules. Many companies are no longer required to issue paper stock and bond certificates, and only issue them in electronic form. This has increased the collectability of the existing paper certificates due to their scarcity.

Scripophily.com is the internet’s leading buyer and seller of collectible stock and bond certificates and has had items on loan for display in the Smithsonian’s Museum of Financial History in New York. The company has been featured on CNBC, USA Today, Associated Press, Reuters, Nightline, Today Show, Baltimore Sun, and Washington Post and in many other media publications.

Scripophily.com /Old Company Research Service is the successor company to all material published by the Marvyn Scudders Manuals, the Robert D. Fisher Manuals, and the Herzog & Co., Inc. obsolete research services, which have been performed continuously since 1880. We are the leading provider of authentic stock certificates, autographs, and old company stock research services.

Scripophily.com was founded by Internet Pioneer, Bob Kerstein (Bob.com). Bob is a CPA and CGMA, and has more than 38 years of senior management experience in the Cellular, Cable TV, Satellite, Internet, Professional Sports and Entertainment Industries. Bob is also the President of the Professional Scripophily Traders Association (PSTA).