Yolanda Foster, Tommy Hilfiger, Peter Sarsgaard, Tom Seaver and others to serve as Honorary Chairs of LRA's Gala on April 5, 2014. Proceeds from the event will be used to fund important research projects at universities and major medical institutions throughout the United States. 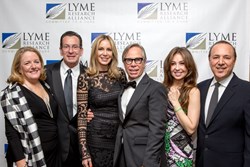 The funds we raise at our Gala are critical to furthering important research initiatives.

Lyme Research Alliance released today a star-studded list of celebrities who have agreed to serve as Honorary Event Chairs for its “Time for Lyme” Gala, April 5, 2014, at the Hyatt Regency Greenwich in Old Greenwich, CT.

The nonprofit’s annual spring Gala is the major fundraising event for LRA, the leading private funding organization for cutting-edge research into the prevention, diagnosis and treatment of Lyme disease by universities and major medical institutions in the U.S. Last year, almost $1 million was raised at the Gala to support LRA's Lyme disease research program.

“Lyme disease is a tremendous public health problem, affecting more than 300,000 new individuals each year,” said Bryanna Kallman, Gala co-chair. “If not diagnosed properly and treated early on, Lyme can become chronic and cause serious, difficult-to-treat, long-term medical problems. An estimated one million individuals are living with chronic Lyme disease today. The funds we raise at our Gala are critical to furthering important research initiatives. We’re thrilled to have so much celebrity support for our efforts.”

The Gala will be held Saturday, April 5, from 6:30 p.m. to midnight at the Hyatt Regency Greenwich in Old Greenwich, CT. The evening features a cocktail reception, dinner, dancing, live auction and special celebrity guest appearances. For more information or to purchase tickets, visit http://www.LymeResearchAlliance.org and clicking on the homepage box, or by calling 203-969-1333.

Lyme Research Alliance, formerly Time for Lyme, is a Connecticut-based, national non-profit that funds cutting-edge research into Lyme and other tick-borne diseases. For more information go to http://www.LymeResearchAlliance.org.