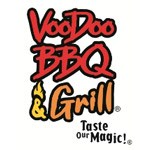 “VooDoo BBQ gives away Free BBQ for a year to 99 lucky guests on opening day as well as many other special gifts and prizes - everyone wins something on opening day."

"Growth has been incredible for our brand in South Florida and Hollywood is a great location for our newest VooDoo BBQ & Grill," said Joe Sloboda, President of Florida Restaurant Franchise Group, LLC, South Florida’s VooDoo Franchisee. The other South Florida stores are located in Pembroke Pines, Kendall and Fort Lauderdale with another four unit openings planned for later this year. Overall the group plans to open a total of 26 locations in Florida over the next 4 years.

VooDoo Grand Openings are a blast. It’s a party atmosphere with 99.9FM KISS Country radio on site adding to the celebration. “Doors will open at 11 a.m. sharp on Sunday, February 9th to hundreds of hungry VooDoo BBQ fans some of which have been in line since the night before,” said Mr. Sloboda. “VooDoo BBQ gives away Free BBQ for a year to 99 lucky guests on opening day as well as many other special gifts and prizes, everyone wins something on opening day,” said Mr. Sloboda.

VooDoo BBQ & Grill brings together a few favorite American BBQ styles and then kicks them up a notch with Caribbean, Cajun and Creole spices to create a delicious New Orleans-style BBQ that has the South Florida market coming back for seconds, thirds, and fourths. Since opening the first location on Mardi Gras day in 2002 in New Orleans, VooDoo BBQ & Grill has grown to 57 units currently operating and planned for Louisiana, Mississippi, North Carolina, South Carolina, Florida, Alabama, Georgia, Maryland and Washington D.C.

VooDoo BBQ’s development is being partially funded by investors who are participating in the U.S. government’s EB-5 Visa program, which allows foreign investors to invest in qualified projects that must create jobs locally for US Citizens.

The Florida Restaurant Franchise Group is a South Florida restaurant development company that is a licensed franchisee of VooDoo BBQ & Grill. Its principles have more than twenty five years of collective experience in the restaurant industry and are also licensed attorneys and experienced developers. For more information on the newest VooDoo BBQ location, go to http://www.voodoobbq.com/hollywood.