Prescribed a toxic dosage of arthritis medications and never notified of the resulting terminal lung disease, a patient receives a jury verdict of $2,700,000 in which the jury sends a strong message about a patient’s right to be informed and a physician’s duty of care. 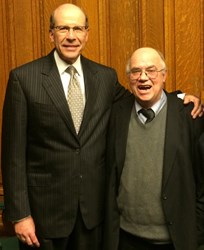 The horrific injuries suffered by Mrs. Neifer that ultimately led to her death a month after the verdict could have been avoided had her doctor exercised the appropriate standard of care. -Peter Weinberger

Medical Malpractice Attorney Peter H. Weinberger of the Spangenberg Shibley & Liber law firm reports that a court jury in Cleveland has returned a verdict of $2,700,000 for injuries caused to Mrs. Debbie Neifer – a wife, mother and waitress at a Cleveland-area Friendly’s. (Case: CV 12 787443 in Cuyahoga County Court of Common Pleas)

According to court documents, in March of 2006, Mrs. Debbie Neifer sought treatment with Dr. Carlos Zevallos for her rheumatoid arthritis. At that first visit, Dr. Zevallos increased her dosage of Methotrexate (a commonly prescribed Disease Modifying Anti-Rheumatic Drug) that her primary care physician had prescribed and ordered a chest x-ray, which was clear, showing no pulmonary disease.

According to court documents, in June 2011 - nine months after the abnormal chest x-ray – Mrs. Neifer was having trouble breathing and was rushed to the emergency room. She learned then that she had developed terminal lung disease, caused by the combination of Methotrexate and Leflunomide. She spent months in the hospital, away from her family, unable to work. She moved to a nursing home, where she was confined to a wheelchair, requiring an increasing supply of external oxygen in order to breath. A month after the verdict, on January 18, 2014, Mrs. Neifer passed away from her injuries, leaving behind her husband Mark and son Michael.

Many of Spangenberg Shibley & Liber LLP's cases come via word-of-mouth, either from satisfied former clients or from other attorneys who know the firm is skilled at handling the complex litigation required for their cases. The Spangenberg law firm has consistently proven itself a worthy partner in co-counsel arrangements on a range of cases and willingly accepts any challenges after carefully analyzing the merits of the case. Though the firm has certainly proven its ability with products liability and has some of the best Cleveland personal injury lawyers, it is equally adept in assisting businesses and corporations with the issues that they have involving business disputes and insurance claims.

The Cleveland attorneys of the Spangenberg, Shibley & Liber Ohio Law Firm have devoted themselves to representing injured persons and aggrieved businesses for more than sixty-five years. They are headquartered at 1001 Lakeside Avenue East, Suite 1700, in Cleveland, Ohio 44114. For more information, you are invited to visit them online at: http://www.Spanglaw.com.