TRILEMMA by Jennifer Mortimer is Now Available Nationwide! A fascinating story of Asian-American executive, Lin Mere, her struggles to survive as CEO of a New Zealand telecommunications company, establish a relationship with her estranged family, and rekindle a romance from her past. 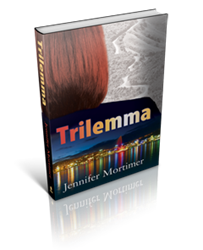 a clever piece of writing…the scene-setting and, more importantly, the end result gives us the chance to reprise events to see which were significant and why. This makes Trilemma better than average on all three limbs of the “lemma.”—Thinking About Books

The Story...
"Maverick executive Lin Mere takes over as CEO for a new telecommunications company trying to compete with the big boys in Wellington, New Zealand. With the clock ticking, Lin has to give up almost everything to tackle the demands of the job.

An Asian-American, Lin has followed her father’s trail to New Zealand to try to establish a relationship with her father’s estranged family and solve the mystery of why they want nothing to do with her...and while in New Zealand, she’s intent on rekindling a romance. When danger secretly enters Lin’s life from an unexpected source, she has to face an ordeal even more challenging than the battles in the boardroom.

The question becomes not so much whether Lin will survive in the corporate world, but whether she will survive at all."

The Buzz...
“Lin’s exploration of a New Zealand not nearly as egalitarian and post-racial as it initially seems, her professional struggles, and her attempts to overcome self-doubt are convincing and often fascinating.”
—Publishers Weekly

“This is a fascinating exploration of the mindset a woman has to develop if she’s not only going to survive in the corporate world, but also climb the career ladder. It’s worth reading if only for that insight. The structure of the book also carries its own interest. …a clever piece of writing…Many will enjoy the scene-setting and, more importantly, the end result gives us the chance to reprise events to see which were significant and why. This makes Trilemma better than average on all three limbs of the “lemma.”
—Thinking About Books

About the Author...
Born in Wellington, New Zealand, Jennifer Mortimer holds degrees in English Literature, Philosophy, and Information Science. Choosing a career in Information Technology, she has worked in the UK, USA, Australia, and South America, as well as New Zealand, reaching the level of Chief Information Officer. She is now a project manager for Weta Digital in Wellington—the people behind the special effects for The Hobbit, Avatar, and Ironman.

Jennifer and her husband Paul, and their two daughters, live in Wellington, New Zealand. Trilemma is her first novel.

TRILEMMA is available through all fine booksellers, and public libraries.

Oceanview Publishing is an independent publisher of mystery, thriller, and suspense novels, headquartered in Longboat Key, Florida. We endeavor to create a tradition of excellence in independent publishing. For more information please visit our website http://www.oceanviewpub.com, or contact publicity and marketing manager, David Ivester at davidi(at)oceanviewpub(dot)com.