Will the United States Join the Mine Ban Treaty, Attend Mozambique Meeting in June 2014? 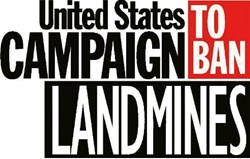 A decision by the Obama Administration to ban landmines now is long-overdue.

President Barack Obama should promptly conclude the administration’s review of US policy on banning antipersonnel landmines and announce a decision to join the 1997 Mine Ban Treaty. A decision is believed to be imminent on the US landmine policy review, which began in 2009.

"A decision by the Obama Administration to ban landmines now is long-overdue,” said Steve Goose of Human Rights Watch, chair of the United States Campaign to Ban Landmines, a coalition of more than 400 non-governmental organizations. “US support would help to convince other countries that have not joined the treaty to reconsider their stance. It would strengthen the norm against these weapons by helping to ensure they are not used in the future."

In total, 161 countries are States Parties to the 1997 Convention on the Prohibition of the Use, Stockpiling, Production and Transfer of Anti-Personnel Mines and on their Destruction (also known as the Ottawa Convention or Mine Ban Convention/Treaty). Parties include every member of the European Union, every member of NATO (except the US), and other key US allies such as Afghanistan, Australia, Iraq, and Japan. The United States is one of only 35 countries that have not joined the Mine Ban Treaty and the only country in the Western Hemisphere aside from Cuba that has not joined.

The Clinton Administration in 1997 set the objective of joining the Mine Ban Treaty in 2006, but the Bush Administration reversed course in 2004. The US has not used antipersonnel mines since 1991 (in the first Gulf War), has not exported them since 1992, has not produced them since 1997, and is the biggest donor to mine clearance programs around the world. However, it still retains millions of stockpiled antipersonnel mines for potential future use.

The US Campaign to Ban Landmines has repeatedly urged that the outcome of the policy review be a decision to join the Mine Ban Treaty as soon as possible, to prohibit the use of antipersonnel mines immediately, and to begin destruction of all stocks of antipersonnel mines. In a January 31, 2014 letter to President Obama, the leadership of the US Campaign to Ban Landmines reiterated this call and noted that since the US policy review began in 2009:

"It’s clear that there is widespread support for the United States to do the right thing on landmines and relinquish these weapons,” said Goose. “Acceding to the treaty would reinforce President Obama’s stated commitment to international humanitarian law, protection of civilians, arms control and disarmament, and multilateralism.”

In the letter to President Obama, the US Campaign to Ban Landmines urges the US to explain its landmine policy review decision at the Mine Ban Treaty’s Third Review Conference, which opens in Maputo, Mozambique on June 23, 2014.

On Wednesday, February 19, the US Campaign to Ban Landmines and the Anti-Personnel Mine Ban Convention Implementation Support Unit, with the support of the European Union, are holding an event at the Carnegie Endowment for International Peace in Washington, DC on the United States and the Mine Ban Treaty. Confirmed speakers include Nobel Peace Laureate Ms. Jody Williams and Prince Mired Bin Raad Al-Hussein of Jordan, Special Envoy for the Mine Ban Convention.

Letter to President Obama Re: 1997 Mine Ban Treaty