The Life, Earth & Health Sciences Magazine EurekaMag.com has published 1,874 new articles on geologic mapping. As a comprehensive publisher of geologic articles, EurekaMag.com coverage includes mapping of the geologic surface or subsurface features including nature and distribution of rock units, and the occurrence of structural features, mineral deposits, and fossil localities. 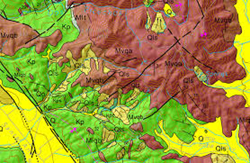 EurekaMag.com was launched in 1998 and has become a comprehensive publisher of references in biology, in the applied life sciences agriculture, horticulture and forestry, in the earth sciences, in the environmental sciences, and in the health sciences. After its latest update stemming largely from the agricultural sciences, it contains a total of 38,897,688 bibliographic references from as early as the beginning of the 18th century (1703). 58% of these entries feature a summary of their scientific content. Besides its new streamlined design and a much improved site search, the site features a mobile version for smartphones and frequently updated accounts at Twitter, Facebook, LinkedIn and Google+.