Animal Support Gets Behind Win-Win Opportunity for Vets & Pets

Animal Support cofounders, Julian Omidi and Dr. Michael Omidi, are proud to support the non-profit organization Animals for Armed Forces® Foundation, which matches sheltered pets with members of the armed forces and their families through free adoption events. 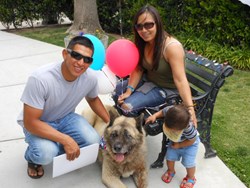 We are thrilled to help Animals for Armed Forces® perform this wonderful service, and will continue to support their mission as long as vets and pets benefit from such match-ups.

Truly win-win opportunities are a rarity in today’s society; however Animal Support and its cofounders, the Omidi brothers, are happy to report they found one and are now enthusiastic supporters of the Animals for Armed Forces Foundation®. The non-profit helps current and former members of the military by providing free adoption services that match their families with healthy pets currently held in shelters.

“Providing veterans and servicemen with loyal, friendly pet companions is the least we can do to show our support and gratitude for their great sacrifice,” says Julian Omidi, cofounder of Animal Support. “What’s so great is that it is a double win since there are so many adoptable pets in need of loving homes. We are thrilled to help Animals for Armed Forces® perform this wonderful service, and will continue to support their mission as long as vets and pets benefit from such match-ups.”

The Animals for Armed Forces Foundation® (http://www.AnimalsforArmedForces.org) was founded to lessen the number of animals held in United States shelters while also providing service members and their families with loyal pets. Additionally, Animals for Armed Forces works to create greater public awareness of the selfless service provided by heroes of the U.S. Army, Navy, Marine Corps, Air Force, National Guard and Coast Guard. Members that qualify for adoption discounts can be active duty, Reserve, or Veterans, or immediate family members of those military service men and women.

According to the United States Humane Society, animal shelters care for approximately six million abandoned cats and dogs every year, half of which are euthanized. Animals for Armed Forces hopes to reduce the number of healthy pets currently in shelters and facing expiration.