The nonprofit organization, Animals for Armed Forces® Foundation, appreciates the support of Julian Omidi and Dr. Michael Omidi and their charity Animal Support. They look forward to expanding their calendar of free pet adoption events for members of the United States military. 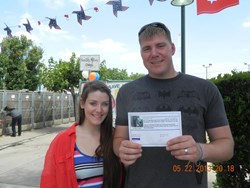 We so appreciate that wonderful sponsors like the Omidi brothers and Animal Support that enable us to keep serving both our brave servicemen and women and the millions of animals in shelters looking for loving, permanent homes.

Animal Support and its charity cofounders, Dr. Michael Omidi and Julian Omidi, recently received the thanks for supporting the work of Animals for Armed Forces Foundation®, a nonprofit organization that provides free pet adoptions for active duty, Reserve, and Veterans of the United States military and their immediate families.

“Each year, we team up with local animal shelters to provide Free Pet Adoption Days for members of our Armed Forces,” says Matt MacFarland, President of the Animals for Armed Forces Foundation®. “Free pet adoptions during these appreciation events are available to active duty, Reserve, and Veterans of the Army, Navy, Air Force, Marines, Coast Guard and National Guard. We so appreciate that wonderful sponsors like the Omidi brothers and Animal Support that enable us to keep serving both our brave servicemen and women and the millions of animals in shelters looking for loving, permanent homes. Thank you, Animal Support, for helping us to achieve our mission.”

The Animals for Armed Forces Foundation® (http://www.AnimalsforArmedForces.org) is dedicated to reducing the number of sheltered animals in the country while, at the same time, giving U.S. veterans and current members of the military affectionate and loyal pets. Animals for Armed Forces also works to educate the public using social media and other platforms about the great services performed daily by heroic servicemen and women.

It is estimated by the United States Humane Society that between six and eight million cats and dogs are currently being housed by shelters, and every year approximately three million are euthanized. Animals for Armed Forces hopes to reduce the number of healthy pets currently in shelters and facing expiration.