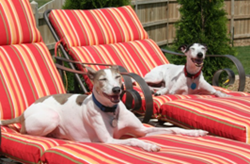 In the course of my practice life, diabetes has often been a source of frustration. Not so much anymore. Why? Because Dia-Treaties® works!

Diabetes is increasing at epidemic proportions in people and even more dramatically in dogs. Since 2006, dog diabetes has increased 32% (American Humane Society, 2012) and 23% in people (CDC 2012). Both diabetic dogs and people often have similar difficulties in regulating their blood sugar levels. It is estimated that 1 in 160 dogs have this disease.

There is some good news! Progress has been made in the treatment of dogs with diabetes that may soon help treat people as well. Over the past 5 years a study treating diabetic dogs with a new formula yielded extremely positive data.

Dr. Sam Lukens, a veterinarian with nearly 40 years of experience assisted in the development and testing of this product. Dia-Treaties® has been shown to enhance insulin utilization and to stabilize blood sugar levels. The dogs using the formula experienced a significant decrease in the signs associated with diabetes.

“In the course of my practice life, diabetes has often been a source of frustration. Not so much anymore. Why? Because Dia-Treaties® works! It works to stabilize blood sugar levels by making your dog’s body cells more sensitive to the insulin being given,” says Dr. Lukens.

Vintek Nutrition recently received a grant from the State of South Dakota to research and develop their formula for use in people having difficulty stabilizing their blood sugar levels. A Phase I clinical trial to ensure safety has been completed. A Phase II clinical trial has been approved focusing specifically on Type II diabetics.

The product if currently produced in a USDA-inspected facility in the South Dakota, USA.

Visit their website at: http://www.vinteknutrition.com for more information, explanations and testimonials.

Vintek Nutrition, LLC was founded in 2009 in pursuit of a solution for an insulin-resistant diabetic dog. The company works with veterinarians and researchers to develop specialized products. Their flagship product, Dia-Treaties, is designed to enhance insulin utilization in diabetic dogs.