The Elwell-Parker Electric Company, a 120-year-old manufacturer of lift trucks and material handling equipment, has re-launched its corporate website, http://www.elwellparker.com. The new website, which was developed by Elwell-Parker's parent company, H&K Equipment of Pittsburgh, marks the first time Elwell-Parker has had an independent online presence since 2001. 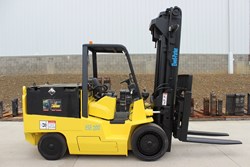 There are still thousands of people using and working with this equipment every day. It's a strong ongoing legacy and we wanted to bring back the website to reflect that.

H&K Equipment of Pittsburgh announced today that it has re-launched the corporate website of the Elwell-Parker Electric Company, a 120-year-old lift truck manufacturer formerly headquartered in Cleveland. The re-launch marks the first time the website, http://www.elwellparker.com, has been active since being taken down in the spring of 2001.

The redesigned website is intended to serve as a practical resource for customers as well as a historical archive for Elwell-Parker's legacy, said H&K Equipment Operations Manager Patrick Koch. Koch's company purchased Elwell-Parker from Hoist Liftruck of Bedford, Illinois in 2010 and has since acted as the OEM and caretaker of the brand.

"Elwell-Parker's Cleveland manufacturing shop was shuttered in 2000, but there are still thousands of people using and working with this equipment every day," Koch said. "It's a strong ongoing legacy and we wanted to bring back the website to reflect that."

The website features detailed vehicle descriptions and media including brochures, guides and spec sheets for many of Elwell-Parker's most popular product lines. There is also an extensive company history that explores Elwell-Parker's role in the material handling industry across three centuries.

In addition to product and company information, the website provides online contact forms for parts and service requests and will act as a gateway for industrial historians and equipment enthusiasts, Koch said. He added that H&K Equipment has also launched official Elwell-Parker accounts on Facebook, Google Plus, LinkedIn and Twitter.

"There is a growing demand for information about these machines," Koch said. "We get a lot of calls from people who want to know whether we have Elwell-Parker trucks available, and increasingly people are asking about the brand online."

"Demand for Elwell-Parker parts is very high," added Howard Fugitt, who oversees purchasing for special engineered products and maintains the Elwell-Parker archives at H&K Equipment's Coraopolis, Pennsylvania facility. "We have trucks in service that are 40, 50, almost 60 years old. Many are so specialized that they literally do not exist anywhere else. The website will make it easier for these customers to contact us so we can get them what they're looking for."

"We have all the original designs and technical information, so we can service, repair or manufacture any Elwell-Parker lift truck from any era, some dating back over 100 years," Fugitt said. "Many people don't realize that we have these capabilities or that Elwell-Parker is still an active brand. The website will help grow that awareness."

Originally one of the nation's oldest makers of electric motors, Elwell-Parker was founded in Cleveland in 1893. In 1906 the company entered the material handling industry when it developed the first electric-powered material handling truck for the Pennsylvania Railroad. Elwell-Parker also built the first low-lift truck in 1914 and helped pioneer many of the first forklifts and other early models of mobile industrial equipment.

In spite of enjoying nearly a century of success, Elwell-Parker was sold to Hoist Liftruck in 2000 after experiencing steep declines following downturns in American manufacturing and increased overseas competition. Elwell-Parker's website was taken offline and redirected to its parent company's website the following year.

H&K Equipment, which itself was founded from an Elwell-Parker dealership by Alan Heidenrich and current CEO George Koch in 1983, has been working to maintain Elwell-Parker's prominence in its core markets since gaining ownership of the company in 2010.

"My career in the industry started because of Elwell-Parker," George Koch said. "Our success was made possible by what they did and it means a great deal to this company to continue that tradition." He added, "Now we have American manufacturing making a comeback; it's time for Elwell-Parker to make a comeback also."

About Elwell-Parker
An American institution since 1893, for over a century the Elwell-Parker Electric Company had a reputation for problem-solving through engineering, designing some of the most specialized industrial vehicles ever produced. In addition to forklifts, Elwell-Parker also developed electric coil handlers, die handlers and high-capacity platform trucks. A subsidiary of H&K Equipment since 2010, Elwell-Parker continues to be known for setting the standard in material handling.

About H&K Equipment
H&K Equipment is a leading full-service provider of lift trucks, container handlers, yard trucks, railcar movers, personnel carriers and industrial cleaning equipment. Founded near Pittsburgh in 1983, H&K Equipment now leads a family of subsidiary companies that employs over 240 people in eight facilities across Pennsylvania, Ohio and Maryland. In addition to Elwell-Parker, H&K Equipment is also the owner and OEM for the brands Autolift and Schreck.