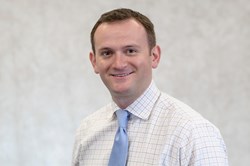 Cundiff says it's individuals like Pall and Quigley that help Kicking For The Dream support Colleen’s Dream Foundation efforts to fight ovarian cancer.

“We are excited to fund the research being conducted by Dr. Broach,” says Cundiff. “His work is both cutting edge, and extremely important in making the early detection of ovarian cancer a reality.”

Broach, a Gynecologic Oncology Fellow at Memorial Sloan-Kettering Cancer Center, says his research focuses on using the molecular basis of ovarian cancer to find novel tests that allow for both the identification of ovarian cancer in its early stages and predict patients’ response to therapy.

“Specifically, we are studying microscopic particles called “exosomes” which are shed by cancer cells, and contain the molecular fingerprint of cells that originate in the ovary,” he says. “Our initial research has demonstrated that exosomes contain a genetic material called microRNA. Exosomes derived from ovarian cancer are unique from those derived from normal tissues in both the type and quantity of microRNA they contain. Exosomes are easily isolated from blood samples and therefore hold great promise as potential biomarkers.”

Broach says the potential results of this research could have important implications in detecting, and treating, ovarian cancer.

“We predict ovarian cancer derived exosomes will serve as a sensitive surrogate for the presence of tumor cells and will allow us both to detect ovarian cancers earlier and to offer more effective and timely therapy to our patients,” he says.

Cundiff says the $11,000 grant money given to Memorial Sloan-Kettering Cancer Center was raised by cancer survivor Jill Pall and NFL kicker Ryan Quigley through Kicking For The Dream, an online fundraising platform created by Cundiff to raise money for Colleen’s Dream Foundation.

Pall says she heard about Kicking For The Dream through social media and wanted to be part of it because of her own experience with ovarian cancer.

“I had presented to a gynecologist all of the symptoms of ovarian cancer but was told I was fine and my pain was normal,” says Pall. “In fact, the doctor told me to take over the counter pain medication and to come back in a year. Had I listened to her instead of going to the hospital, I probably would not have survived my cancer.”

It was after reading an abstract written by Dr. Broach, that Pall decided to dedicate her fundraising efforts towards his early detection research project at Memorial-Sloan Kettering Cancer Center.

Ryan Quigley, punter for the New York Jets, teamed up with Pall in the Kicking For The Dream fundraising effort for the Memorial Sloan-Kettering Cancer Center grant. He says raising money for this grant has raised his awareness about how deadly ovarian cancer is, and how important early detection research is.

Cundiff says it's individuals like Pall and Quigley that help Kicking For The Dream support Colleen’s Dream Foundation efforts to fight ovarian cancer.

“We love what Jill Pall and Ryan Quigley have accomplished,” says Cundiff. “It's only fitting that all the money they raised stays close to home for them.”

Go here for more about Kicking For The Dream

Memorial Sloan-Kettering Cancer Center — the world's oldest and largest private cancer center — has devoted more than 125 years to exceptional patient care, innovative research, and outstanding educational programs. Today, it is one of 41 National Cancer Institute–designated Comprehensive Cancer Centers, with state-of-the-art science flourishing side by side with clinical studies and treatment.

The close collaboration between MSKCC’s physicians and scientists is one of the Center’s unique strengths, enabling MSKCC to provide patients with the best care available while discovering more-effective strategies to prevent, control, and ultimately cure cancer in the future. Education programs train future physicians and scientists, and the knowledge and experience they gain at Memorial Sloan-Kettering has an impact on cancer treatment and biomedical research around the world.