Saturday, Feb. 22, The Condor Club will be screening UFC Fight Rousey vs. McMann. 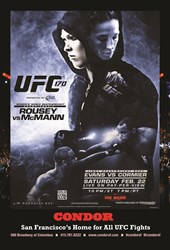 The Condor Club is calling all UFC fans to join them Saturday, Feb. 22nd to watch the Rousey vs. McMann fight as they battle for the women’s bantamweight title.

Rousey vs. McMann will be screened live from Las Vegas, NV on pay-per-view at 7 p.m. Customers at The Condor Club will be able to watch the UFC fight live on Condor’s HDTVs with sound on 2 massive 90-inch screens.

The Condor Club is San Francisco’s home for all UFC fights. They offer the perfect atmosphere to relax and enjoy this exciting UFC event. They will also be inviting customers to watch Johnny Hendricks vs. Robbie Lawler on Saturday, March 15th.

For more information about The Condor Club and their upcoming UFC fight screenings, visit http://condorsf.com/san-franciscos-home-for-all-ufc-fights/.

The Condor Club is San Francisco’s original gentleman’s club. In 1964, they became the first topless club in the United States. Since then, they have provided the Bay Area with quality adult entertainment and superior service. The club features a VIP lounge, champagne rooms, bottle service, topless dancing and concierge services, all in an effort to provide their customers with a special and exclusive experience. Everyone is sure to have a good time at The Condor Club. With live music, a full bar and restaurant and topless adult entertainment, there’s no better gentleman’s club around. The Condor Club is open 6 p.m. – 2 a.m. Monday through Wednesday and 12 p.m. – 2 a.m. Thursday to Sunday. For more information, visit their website at http://condorsf.com/.