In Dispatches from the Eastern Front, Gerald Felix Warburg takes us on a fascinating four-decade tour inside the U.S. Capitol, where idealists and cynics clash, and the best policymaker is equal parts dreamer, salesman, and psychologist. 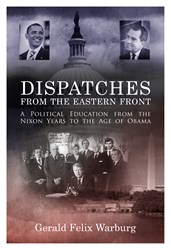 Gerry Warburg takes us inside decades of backroom deal-making at the Capitol.

The Nuclear Non-Proliferation Act and the Anti-Apartheid Sanctions Act are just two of the landmark laws Warburg was instrumental in helping craft and enact. Warburg started his D.C. political career at 21 as a lowly intern for U.S. Senator John Tunney (D-CA) in 1975. He ended it as a precinct organizer, helping turn out the vote in key Virginia counties for Barack Obama’s 2008 presidential bid. Along the way, he was deeply involved in U.S. policymaking on such issues as Soviet nuclear arms control, Israel aid, and human rights. He spent years working on the Senate floor as the defense, intelligence and foreign policy advisor to Majority Whip Alan Cranston, the California Democrat. Today, he is Professor of Public Policy and Assistant Dean at University of Virginia’s Batten School of Leadership and Public Policy.

In Dispatches from the Eastern Front: A Political Education from the Nixon Years to the Age of Obama (Bancroft Press, March 2014, hardcover), Gerry Warburg takes us inside decades of backroom deal-making at the Capitol, where principles are pressed by the political necessity of compromise. Unfailingly optimistic, Warburg holds firm that public service is a noble profession—one that Millennials should be encouraged to enter. Despite our government’s many flaws, Warburg concludes America’s democratic promise can still be fulfilled. “Just as second marriages represent the triumph of hope over experience, political memoirs should offer optimism as an antidote to the cynicism pervading most discussions about Washington,” he writes. In taking us deep into the D.C. labyrinth and without glossing over its corrupt practices, Warburg equips aspiring public servants with key insights to advance positive change. For readers not Washington-bound, Dispatches from the Eastern Front offers a compelling account of idealism and realpolitik in action.

Warburg's memoir is not only the story of a man navigating deep political waters, but also seeks to open an avenue of thoughtful discussion on many serious and ongoing topics.