Reacting to what began as an investigation prompted by Best Friends Animal Society, http://www.bestfriends.org, and other animal welfare groups, the California Superior Court of Los Angeles County has entered a permanent injunction against Barkworks, a Los Angeles area pet store chain dogged with accusations that it acquires its animals from “puppy mills” and conceals that fact from consumers. 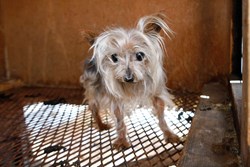 That the court has ordered Barkworks to reveal more information about the dogs it sells will make for more awareness among would-be pet owners and, hopefully, encourage them to opt for adopting an animal from their local shelter.

The California Superior Court of Los Angeles County, reacting to what began as an investigation prompted by Best Friends Animal Society and other animal welfare groups, has entered a permanent injunction* against Barkworks, a Los Angeles area pet store chain.

The court order stems from settlement of a lawsuit against Barkworks brought by several parties in September 2011, which alleged that consumers bought puppies from Barkworks after assurances that the puppies came from “reputable breeders” and were “not ill.” However, the lawsuit claimed that the puppies became extremely ill and exhibited health problems commonly associated with dogs from puppy mills.

As part of the settlement, Barkworks agreed to compensate the parties for their veterinary bills and disclose more information about the source of its puppies to future customers. Specifically, the settlement requires Barkworks to disclose that its puppies may become sick with diseases like parvovirus and heart disease, and that it does not inspect the breeding facilities where the puppies originate. Barkworks must also disclose the breeder’s name, contact information, and USDA certificate number to facilitate research into a puppy’s background.

“This is a great day for countless dogs suffering in puppy mills because the injunction strikes at the core of what we have been campaigning against for the last two years,” said Elizabeth Oreck, national manager of puppy mill initiatives for Best Friends. “That the court has ordered Barkworks to reveal more information about the dogs it sells will make for more awareness among would-be pet owners and, hopefully, encourage them to opt for adopting an animal from their local shelter.”

This settlement and accompanying court order, Oreck said, are an important step in the ongoing fight to combat puppy mills and the pet store practices that support them. “No dog deserves to live in the poor conditions at a puppy mill, and no well-intentioned person should have to endure the emotional and financial devastation of watching their puppy suffer or die,” she said.

Best Friends began peaceful tabling activities near Barkworks stores back in 2008 to let consumers know more about dogs that are born in puppy mills.

Based in large part on the diligence of the volunteers for Best Friends (http://www.bestfriends.org), a national non-profit animal welfare organization, the lawsuit was filed Sept. 28, 2011 in California Superior Court in Los Angeles County against Barkworks, which operates a chain of Southern California pet stores.

In 2010, investigative journalist Lu Parker of KTLA television did a special report on Barkworks that earned Parker a 2010 Genesis Award (an annual national award bestowed by the Humane Society of the United States on major news and entertainment media who produce outstanding work that raises public awareness of animal issues).

That same year, the California Courts of Appeals ruled in favor of Best Friends in an action against the Macerich Company,** which owns commercial property throughout the country. The decision stated that shopping malls could not prohibit Best Friends Animal Society from passing out information near a business during hours that the mall is open to the public.

**In the Courty of Appeal of the State of California, Second Appellate District, Division Two, Case No. B221067, (Los Angeles County Superior Cout No.SC104061)

Best Friends Animal Society is the only national animal welfare organization focused exclusively on ending the killing of dogs and cats in America's shelters. An authority and leader in the no-kill movement since its founding in 1984, Best Friends runs the nation's largest no-kill sanctuary for companion animals, as well as life-saving programs in partnership with rescue groups and shelters across the country. Since its founding, Best Friends has helped reduce the number of animals killed in shelters from 17 million per year to about 4 million. Best Friends has the knowledge, technical expertise and on-the-ground network to end the killing and Save Them All®.