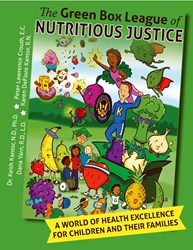 'I can’t thank Effective Press enough for the nominations and Amazon for helping to allow this all to come together,' said Dr. Keith Kantor

Effective Press announces that the new children’s illustrated book, The Green Box League of Nutritious Justice (ISBN 978-0988316317, Effective Press, 2014) by Dr. Keith Kantor; Peter Crouth, E.C.; Dana Yarn, R.D.; and Karen Kantor, R.N.; with illustrations by Sarah Adam has been nominated for the prestigious “IPPY” Awards, also known as the Independent Publishers Book Awards in five categories. The book teaches children about nutrition and fitness in a fun way that will allow parents and children to share and learn while reading the book. The categories the book was nominated for are: Children’s Picture Book (all ages); Education I (workbook/resource); Health/Medicine/Nutrition; Parenting; and Best Children’s Illustrated E-book. Beautifully illustrated, The Green Box League of Nutritious Justice takes children on an adventure while teaching them a healthy lifestyle. Conducted annually, the “IPPY” Awards honor the year's best independently published titles from around the world and is held by the Independent Publishers Association of America. The "IPPY" Awards were conceived as a broad-based, unaffiliated awards program open to all members of the independent publishing industry, and are open to authors and publishers worldwide who produce books written in English and intended for the North American market. Winners will be announced this summer in New York City on the eve of BookExpo America, the nation’s premiere publishing trade show.

“It is my hope that The Green Box League of Nutritious Justice brings greater awareness and recognition for the need to educate our children early on the benefits of eating healthy and keeping fit,” continued Kantor. “Award nominations like the “IPPY” Awards assist in creating the needed public awareness for this.”

The Green Box League of Nutritious Justice introduces memorable characters such as Knute Trition (the hero), Ed Yucation, Blueberry Bill, Bianca Broccoli, Cornelius Corn, Gordon Grape, Olivia Olive, and many more. The book is perfect for parents who want to introduce children to a healthy lifestyle and be part of the journey of enrichment. The book is also ideal for schools who seek to teach children the benefits of proper nutrition and exercise. But not just children, adults also will learn as they go through the pages of this book that is filled with informative facts about nutrition and exercise that even many of them may not be aware of. The Green Box League of Nutritious Justice offers all the lessons needed for a healthy and fit life including recipes, exercise suggestions, and safety tips. Beyond just teaching proper nutrition in a fun way, Dr. Kantor, who serves on the Presidential Active Lifestyle Award committee offers exercise suggestions as well as challenges children and adults to take part in the program. The book is one that children will pass on to their children with characters that will never grow old and a message that is timeless. A portion of the proceeds from the sale of the book will go to Children’s Miracle Network Hospitals.

The “IPPY” Awards are the world's largest book awards competition. The "IPPY" Awards, launched in 1996, are designed to bring increased recognition to the deserving but often unsung titles published by independent authors and publishers. Established as the first awards program open exclusively to independents, over 3,000 "IPPYs" have been awarded to authors and publishers around the world.