The International Shugden Community is staging demonstrations with hundreds of Buddhists at the Dalai Lama’s speaking events this week in California, accusing him of religious persecution and human rights abuses. 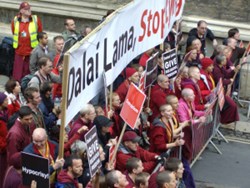 "By our demonstrating at his public events we are telling the Dalai Lama to 'Stop lying, stop harming millions of people, stop abusing basic human rights, and stop religious discrimination'."

The demonstrators are accusing the Dalai Lama of using his political power to ban a mainstream religious practice and create a religious apartheid, segregation, and system of persecution in the Tibetan exile community, including refusal of medical treatment, violent attacks on citizens and making hundreds of monks homeless.

Hundreds of Buddhists, including monks and nuns will stage impassioned protests against the Dalai Lama, during his speaking engagements this week in the Bay Area and Los Angeles.

The demonstrators want to bring attention to what they believe is a hidden, intensive persecution campaign by the Dalai Lama of thousands of Tibetan-exile citizens who practice a 400-year old mainstream tradition of making prayers to the Buddhist Deity Dorje Shugden (Al Jazeera Reports, Dalai Lama: The Devil Within, April 13, 2009, http://www.aljazeera.com/programmes/peopleandpower/2008/09/200893014344405483.html or http://www.youtube.com/watch?v=Rqa2DeOIEQM).

Claiming that their prayers harm his personal health and the cause of Tibet, the Dalai Lama has imposed an aggressive, forced ban on this religious practice, which he himself engaged in for over 40 years (Cabinet of Tibet Government in Exile - Dharamsala 'Points of the Kashag's statements concerning Dogyal, 31 May 1996, http://www.dalailama.com/messages/dolgyal-shugden/kashags-statement, Aug 1st, 2008).

Rebecca Foley, spokesperson of the International Shugden Community (ISC), an umbrella organization made up of Shugden practitioners from many Buddhist traditions, explains: "His words and actions have and are causing millions of people to suffer by creating division between them and destroying their harmony and peaceful life. There have been many incidences where his followers have been incited to extreme anger with Shugden practitioners. They have forcefully expelled Shugden practitioners from Tibetan society using public humiliation, provocation, intimidation and threats, including dismissing them from their jobs, refusing basic, and even medical services to them.

"We believe that through this harm and intolerance he is acting in complete contradiction with Buddha's teachings and he is publicly showing great disrespect to Buddha and Buddhism.

"By our demonstrating at his public events we are telling the Dalai Lama to 'Stop lying, stop harming millions of people, stop abusing basic human rights, and stop religious discrimination'. Should we expect any less from this supposed 'man of peace'?"