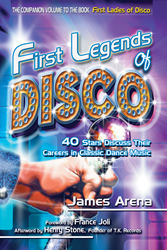 I was privileged to share the personal stories of many disco legends, such as Alfa Anderson (formerly of the Nile Rodgers group Chic), Randy Jones (formerly with the Village People), George McCrae (“Rock Your Baby”) and France Joli (“Come To Me”).

Forty years after the first disco songs topped the U.S. pop charts and launched an exciting new era in music, author James Arena asks: where are these stars today?

In his new book “First Legends of Disco,” Arena celebrates the disco genre nearly four decades after “Saturday Night Fever” reigned supreme. Following his first book on the subject, “First Ladies of Disco,” Arena shares his interviews with 40 of the most prominent stars of the era as they look back at their careers.

“I wanted to remind people of the great joy and energy these people brought to the masses,” Arena said. “I was privileged to share the personal stories of many disco legends, such as Alfa Anderson (formerly of the Nile Rodgers group Chic), Randy Jones (formerly with the Village People), George McCrae (“Rock Your Baby”), France Joli (“Come To Me”) and Janice Marie Johnson of A Taste of Honey (“Boogie Oogie Oogie”), just to name a few.”

Other stars featured in the book include Sarah Dash, Bonnie Pointer and members of Sister Sledge.

Focusing not only on the musical fuel these celebrities supplied to the fire that swept the nation’s dance floors, “First Legends of Disco” also takes a look at the personal triumphs and setbacks these artists experienced.

“This book will give readers a fascinating inside look at what really happened to these stars during this dramatic period in music history and in the years that followed the disco explosion,” Arena said.

For those who experienced disco firsthand and those interested in the “behind-the-scenes” of life under the disco ball, “First Legends of Disco” gives a fascinating look at an historic era that every generation can appreciate.

About the author
James Arena is the author and innovator of the first and only published books to date that focus on the original artists who pioneered classic disco music, “First Ladies of Disco” and its follow-up, “First Legends of Disco.” Arena also penned “Fright Night on Channel 9.” Arena is based in New York City.