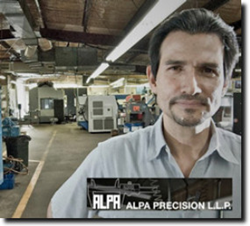 MTI Systems announced today that ALPA Precision, L.L.P (Houston, TX) began using their Costimator software in March of 2013. Their decision to invest arose after watching one demonstration of the estimating software.

Half way through the presentation, Alberto Lozano, Owner and President of Alpa Precision, saw just what he was hoping for – a better way to estimate quotes with multiple quantities - without duplicating steps in the process.

“We used to estimate quotes manually,” said Alberto Lozano. “Now Costimator automates much of what needs to be prepared and calculated. This not only helps us identify lower cost ways of manufacturing parts or performing manufacturing processes more quickly, it helps us deliver more of the information that our customers want – right in the beginning.”

In today’s competitive marketplace, customers want more information and choices as they decide what to buy. This includes the manufactured parts that get quoted by machining manufacturer, ALPA Precision.

More and more, customers request quotes that include multiple quantities and in many cases, the requests are long after the quote has already been submitted. No matter when the changes are made, customers still expect consistently accurate results - in a timely fashion.

“Costimator® reduces my quoting time by more than 20%,” remarks Lozano. “This provides more time to estimate more quotes and for double-checking quotes, as well as offering more programming time for manufacturing parts.”

About Alpa Precision L.L.P.
Alpa Precision has been proudly servicing the oil and gas industry since 1981. After 30 years, they stand to be one of the top independent machine shops in Houston, TX, with outstanding service and prestigious clients. Using a variety of CNC and EDM machines and specializing in exotic metals such as Inconel, Titanium and MP35, Alpa Precision manufactures prototype part jobs, as well as production jobs from all sectors of the energy industry, and more.

About Costimator Software
Costimator cost estimating and quoting software began development in 1982. Originally designed for suppliers, it reduces estimating time, while not compromising accuracy or consistency for manufacturers who do machining, fabrication and mechanical assembly. The cost estimating software system calculates cycle times and the cost of manufacturing a part or assembly based on the capabilities of the suppliers’ equipment and their shop rates.