Bitingduck will release Hunter Gardner's debut novel, "School.", in print form on March 1, 2014. The print version will contain QR codes linked to a soundtrack produced custom for the book, as a prelude to a fully interactive electronic version expected later this spring. 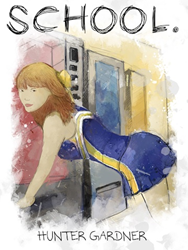 A great story of friendship and coming of age.

Hunter Gardner's debut novel, "School.", is available March 1 from Amazon and Barnes and Noble. "School." is a young adult adventure (ages 13-18) set at Buena Vista Academy—a fictionalized private school in Wilson, North Carolina. The story has a distinctly Southern flavor and an abundance of local color, as the characters’ pursuits take them into the unfamiliar of N.C. State in Raleigh and UNC-Chapel Hill college campuses, as well as a hallmark scene that features the folklore-laden Acid Park on the outskirts of Wilson.

Driven by a need to create order after transferring schools, Lucas Donovan is an enigmatic, business-minded high school sophomore who quickly finds that there is a demand for nearly everything: from study pills to answer keys to drugs. Lucas is accompanied on his dangerous escapades by his co-conspirators: Jake Holden, his long-time best friend; Christopher “The Poet” Chapman, a recent British transplant; and Tyler Beason, a football player with a short fuse but a heart of gold—who all use the business operation to get what they want.

The print book features QR codes at the end of each chapter that link directly to custom music clips for an enhanced reading experience. The clips come primarily from North Carolina bands around the Triangle area, such as The Old Ceremony (Raleigh), Morning Brigade (Chapel Hill) and Bombadil (Durham), while also includes bands from Charleston, SC (Stoplight Observations) and Los Angeles (Matt Kabus). The book also contains links six original tracks that Gardner produced in the summer of 2013 off his Clap When I Clap EP. Electronic versions of the book without added features are also available immediately; readers may obtain the e-version free with the print version through Amazon's Matchbook program. E-book versions of the novel, with fully integrated music, will be available later this spring for advanced e-readers (Kindle Fire, Nook Color, and the iPad).

Hunter Gardner is a lifelong writer and first-time novelist currently residing in Charleston, SC. First published at age 16, Gardner has gone on to be published in Thunderclap Press and Charleston Magazine as well as the humor-sports blog, The Daily Pulp. Meg Stivison of The Absolute Mag calls School., “A great story of friendship and coming of age, with double-crossing and half-truths unfolding in surprising layers.” Jon Tuttle of The Trustus Plays notes that, “Hunter Gardner has announced himself as an assured craftsman with a real moral authority, some sophisticated tools, and the guts to use them.”

Bitingduck Press is an independent press founded by two scientists in 2012. It acquired Boson Books that same year, and now represents over 150 titles and 70 authors. The press specializes in fiction and narrative non-fiction by and about scientists, with two major themes for 2014-15: Young Adult and Hard Sci-Fi. Book reviewers and members of the press may obtain advance review copies all upcoming titles on NetGalley or by contacting Bitingduck Press directly. Submissions guidelines are found on the press's website.