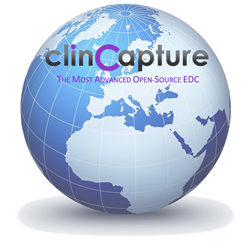 As an open source system ClinCapture is utilized across the globe. It’s a testament to the system that these users seek us out for our world-class EDC services.

Clinovo has secured its first Indian client for its open source Electronic Data Capture (EDC) system ClinCapture. ClinCapture was chosen among many competing EDC system vendors primarily for its ease of use and advanced features. By switching to ClinCapture, the Indian medical device company made the transition from using paper to Electronic Data Capture (EDC). Customization and study builds were provided by Krishagni Solutions, Clinovo’s preferred partner for the Indian market.

ClinCapture is saving both time and money for the medical device company, while simultaneously increasing data quality. ClinCapture is an open source system that has no license fees or vendor lock-in. "We now have much cleaner data because of the edit checks and dynamic attributes within ClinCapture. The ease of creating new forms allows us to see the progress of the project instantly and we no longer have to deal with the costs associated with using paper CRFs," explains the company’s Deputy General Manager of Clinical Research. "We’ve also seen improvements in our operations due to the Calendared Events feature which reminds us when to follow up with patients. It has significantly increased the accuracy of our data."

After continued growth in the US and European markets, Clinovo’s implementation of ClinCapture for the Indian medical device company signals the company’s first deal in India and its ascension as a global player in the eClinical Systems market. "As an open source system ClinCapture is utilized across the globe. It’s a testament to the system that these users seek us out for our world-class EDC services," explains Ale Gicqueau, President & CEO of Clinovo.

Clinovo has grown organically from a Bay Area focused company to become a major player in the field of clinical trials on the international scene. ClinCapture has clients in Asia and several European countries including Switzerland and Germany as well as partners in Japan, Israel, India and Spain. ClinCapture is supported by a thriving global open source community of users and developers launched in February 2013. Since then, ClinCapture has been downloaded by community members over 400 times, from more than 50 countries. By pairing users feedback and developer’s technical skills, community members are able to aid in the constant enhancement of the system in order to meet the needs of life science companies, ultimately accelerating the delivery of medical innovations to patients.

Danny Lieberman, General Manager at Israel-based Clear Clinica, and active member of the community, remarks how ClinCapture’s open source technology plays a big part in their SaaS product offering. "Israel has over 700 medical device companies with over 100 studies running at any given time and the message we hear is ‘get us there - faster, better and cheaper’. We have been actively involved in Open Source for over 15 years and we understand the value in open source business models. ClinCapture enables us to move quickly to market and respond to customer requirements without the constraint of vendor lock-in nor the financial burden of closed-source EDC software."