Khojaly tragedy remembered in the shadow of Westminster

The victims of the Khojaly Massacre have been remembered with a moving concert in London, organised by The European Azerbaijan Society, attended by over 400 people. 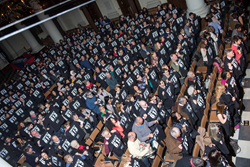 This is a stain upon civilised society. I hope all those present tonight will lobby our government to play its full and proper part in encouraging peace and justice in Nagorno-Karabakh.

On 26 February, more than 400 diplomats, friends of Azerbaijan and music-lovers from around the world attended an outstanding concert in the 18th century St. John’s, Smith Square, close to Parliament, organised by The European Azerbaijan Society (TEAS). This featured a rich and vibrant programme of Azerbaijani and European classical music. The concert commemorated the lives of the 613 civilian men, women and children who were the victims of the Khojaly Massacre, which occurred on 26 February 1992. This was the worst single incident of the Armenian–Azerbaijani conflict over Nagorno-Karabakh, which raged from 1988–94, claiming the lives of around 30,000 people on both sides. The conflict remains unresolved, with around 18 per cent of Azerbaijani territory remaining occupied by Armenia. This has led 875,000 people to remain as Internally Displaced Persons (IDPs) and refugees in camps across Azerbaijan for 20 years.

The audience took their seats to the evocative 'Benedictus', by William Lloyd-Webber (father of Andrew and Julian), performed from the organ loft as a duet between the UK-resident Azerbaijani violinist Nazrin Rashidova and organist Jeremy Cooke.

Lionel Zetter, Director, TEAS said: “Last night I was at the TEAS Khojaly commemoration event in Istanbul, and we heard an eyewitness account from a Khojaly survivor. She lost her mother, father, and sister. She is not a politician or journalist, and she described the events of that night in her own words, moving many audience members to tears.”

He then asked all audience members to hold aloft a shirt emblazoned with the words ‘Khojaly 613’ to demonstrate their solidarity with the massacre victims and survivors. Lionel continued: “We need to ensure this kind of action never happens again. This is a concert for peace.”

H.E. Fakhraddin Gurbanov, Azerbaijani Ambassador to the UK, recalled: “This is a special day, commemorating a black page in the history of Azerbaijan. The occurrences of 22 years ago were more than just a massacre. Any war has its rules, and there are international conventions on how to conduct a war. The killing of civilian people flouts these, and the civilians in Khojaly were brutally murdered.

“Human life is given by God. Only God has the right to take life, and it is a crime if someone else does so. We are here today for peace, and to commemorate the people who were killed. We are living in a very complicated and controversial world in which there are many ongoing wars, but people should learn from the mistakes of the past. God bless the souls of the people who were killed in 1992.”

Christopher Pincher MP, Member of the Energy and Climate Change Select Committee, and Chairman, All-Party Parliamentary Group for Azerbaijan, said: “During my visits to Azerbaijan, I have become aware of the dreadful psychological scar that Khojaly has left upon the minds of the Azerbaijani people.

“On that night 22 years ago, 613 people, including the elderly, women and children, were brutally murdered. A further 487 people were injured, some of which were horribly maimed. This is a stain upon civilised society. I hope all those present tonight will lobby our government to play its full and proper part in encouraging peace and justice in Nagorno-Karabakh.”

Following the screening of a short documentary on the tragedy, the opening work was the UK premiére of the chamber version of 'Khojaly 613'. Azerbaijani violinist Sabina Rakcheyeva, Syrian clarinettist Kinan Azmeh and The Solstice String Quartet performed this piece, which was composed by French composer Pierre Thilloy as a TEAS commission. The orchestral version was premiéred last year and subsequently shortlisted for the prestigious Victoires de la Musique Classique award in France. A frequent visitor to Azerbaijan, the composer wrote in his descriptive notes: “I wanted to pay a unilateral tribute to the men and women whose flesh and spirit suffered during this terrible night, and to those who lost everything, even hope.”

Nazrin Rashidova and her all-female FeMusa Ensemble headlined the concert. Their programme included the UK premiére of the third movement from the contemporary Azerbaijani composer Agshin Alizade’s fourth symphony entitled 'alla Mugham’. Composed 30 years ago, this combines contemporary atonal composition with elements emulating the sound of mugham singers, including a wordless passage for the human voice. Mugham is one of the indigenous musical forms of Azerbaijan and generally recognised as having been developed in Nagorno-Karabakh.

FeMusa went on to perform two pieces by the renowned Azerbaijani composer Fikret Amirov, who developed ‘symphonic mugham’. These were 'Elegie' and 'Mugham Poéme', both of which feature haunting melodies on the violin combined with mugham harmonies.