Members of the Tennessee Telecommunications Association recently met with state lawmakers at its annual "TTA Day on the Hill". 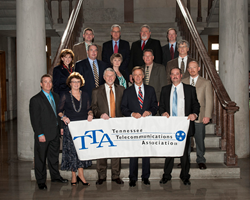 'We are particularly concerned about four bills that have been introduced this session,' says Levoy Knowles, TTA's executive director.

The Tennessee Telecommunications Association (TTA) held its annual "TTA Day on the Hill" on Wednesday, February 19. Executives from cooperative and independent broadband and phone providers gathered at the state capital to express their concerns about bills that would threaten their ability to deliver affordable broadband service to the state's rural regions.

"We are particularly concerned about four bills that have been introduced this session," says Levoy Knowles, TTA's executive director. "These bills would allow municipalities to expand beyond their current footprint and offer broadband in our service areas. If this were to happen, municipalities could cherry-pick our more populated areas, leaving the more remote, rural consumers to bear the high cost of delivering broadband to these less populated regions."

"We appreciate the work of the House Business and Utilities Committee," says Knowles. "During their committee meeting, members recognized the TTA and the work our
association members do in delivering broadband connectivity to the small towns and communities across Tennessee."

TTA members thanked the committee for action on a recent bill, and discussed their position on other bills now pending in the House of Representatives. Later in the day, the group enjoyed a brief visit with Gov. Bill Haslam.

The Tennessee Telecommunications Association is a network of cooperative and independent companies providing broadband, phone and related telecommunications services to the small towns and rural regions of Tennessee. The TTA focuses on legislative advocacy and education, while fostering collaboration among its members for the benefit of their consumers. More information about the TTA can be found at the association's website: http://www.tenntel.org.