The Heimlich Heroes education program supported by Deaconess Associations, Inc, is expanding into schools and youth organizations nationwide. The program teaches children in grades two through eight how to become super heroes by correctly performing the Heimlich Maneuver on choking victims in order to save a life. 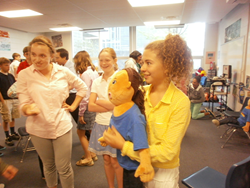 Heimlich Heroes, the educational program that teaches students how to be super heroes by performing the Heimlich Maneuver to save a life, is expanding nationwide to include students in grades two through eight and youth organizations.

Heimlich Heroes program manager Terri Huntington said the program, which was developed in Cincinnati in 2012, has formed relationships with several youth organizations. The Heimlich Maneuver is used to save a person from choking on food or a small object.

“When someone is truly choking and cannot talk, you only have four minutes before they lapse into a coma and die,” said Dr. Henry Heimlich, inventor of the Heimlich Maneuver. “Only the Heimlich Maneuver, when administered properly, will expel food or an object, allowing the victim to recover.”

The Heimlich Heroes program is educationally based and can be used in the classroom, club or group setting. The training can be supplemented by an interactive curriculum designed by a teacher to include STEM lessons for the classroom.

The Heimlich Heroes kit includes a 12-minute instructional video, learning materials for students based on their ages, and the Heidi or Hank training doll, which provides hands-on practice of the maneuver. These specially-designed 42-inch dolls feature an internal diaphragm, lungs and a windpipe. The dolls’ plastic mouths expel a peanut-sized foam cushion when the maneuver is performed correctly.

Practicing the maneuver on a doll helps children learn the approximate amount of pressure they need to exert and build confidence that what they are doing is correct, said Huntington. When a life-threatening situation occurs, trained Heimlich Heroes are then ready to spring into action and save a life.

"Each year, about 4,000 people still choke to death on food or small objects, according to the Centers for Disease Control," said Huntington. "That's the fifth leading cause of accidental death in the nation. We hear each day about people-- many of them children in lunch rooms-- who choke and are saved by a teacher or friend who performs the Heimlich Maneuver on them."

The Heimlich Heroes program has taught more than 1,000 children since 2012. Almost 500 children are signed up for the program for March and April.

“We hope that within a couple of years everyone will know exactly what the Heimlich Heroes program is,” said Huntington. “We want to reach as many people as possible because we believe everyone can be Heimlich Hero if given the proper instruction. We want to save lives.”

Heimlich, a Cincinnati chest surgeon, developed the Heimlich maneuver in 1974. His new memoir, Heimlich's Maneuvers: My Seventy Years of Lifesaving Innovation (Prometheus Books, February, 2014) is on sale in bookstores and online. In his memoir, he talks about his medical career and how he invented the Heimlich Maneuver.

Heimlich Heroes is funded by Deaconess Associations, Inc., which supports The Heimlich Institute. All are based in Cincinnati. For more information about the Heimlich Heroes program, go to http://www.heimlichheroes.com.

The Heimlich Heroes program is a Deaconess Associations, Inc. and Heimlich Institute initiative that teaches children grades two through eight how to become super heroes by learning to perform the Heimlich Maneuver correctly in order to save a life.

Hank and Heidi dolls used to teach the Maneuver.