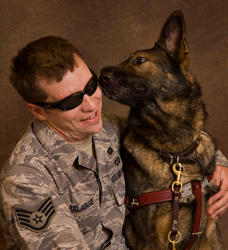 Newman’s Own Foundation’s passionate support of our mission enables Fidelco to expand its efforts to serve our nation’s blinded heroes with the highest quality German Shepherd Guide Dogs available anywhere in the world.

Fidelco breeds, trains and places its unique breed of German Shepherd Guide Dogs for people who are blind. The Newman’s Own Foundation grant will support Fidelco’s core mission with a special emphasis on services for blinded veterans and their family members. Since 1997, Newman’s Own Foundation has granted more than $600,000 to Fidelco.

“There is no greater sacrifice than serving in the military and defending our country,” said Eliot D. Russman, Fidelco’s CEO and Executive Director. “Newman’s Own Foundation’s passionate support of our mission enables Fidelco to expand its efforts to serve our nation’s blinded heroes with the highest quality German Shepherd Guide Dogs available anywhere in the world.”

“Recalling Paul Newman’s service in the United States Naval Corps in World War II, we have been committed to supporting military nonprofits for over twenty years,” said Robert Forrester, President and CEO of Newman’s Own Foundation. “More service men and women are surviving battlefield injuries which leave them seriously injured and blind. We are pleased to award a grant to Fidelco as they endeavor to make a difference in the lives of these veterans and their families.”

There are more than 160,000 blind veterans now living in the United States, according to the Department of Veterans Affairs, and that number is expected to increase. Each year, some 7,000 veterans from the Korean and Vietnam conflict eras become blind or visually impaired due to age-related diseases. And about 17 percent of younger veterans wounded in Iraq and Afghanistan suffer traumatic eye injury, according to the American Foundation for the Blind, including penetrative eye damage from IED explosions.

The ongoing partnership between Newman’s Own and Fidelco was recently featured in “Give It All Away: Newman’s Own Recipe for Success,” a Connecticut Public Television Original Documentary.

Fidelco shares the Newman’s Own Foundation’s deep roots in Connecticut; since its founding in 1960, it remains the only Connecticut-headquartered guide dog school. The non-profit organization relies solely on the gifts and the generosity of individuals, foundations, corporations and civic organizations. For more information visit http://www.fidelco.org.

Meet two of Fidelco’s clients whose Fidelco Guide Dogs were provided through the generosity of Newman’s Own Foundation:

On January 3, 2010, in the remote mountains of Afghanistan, SSgt Michael Malarsie was blinded and severely wounded by a powerful improvised explosive device (IED) that killed four team members and blew him off a bridge. Following months of determined rehabilitation and painful facial surgeries, and exactly one year later, Michael was partnered with his Fidelco Guide Dog “Xxon.” With Xxon leading the way, Michael returned to active duty status as the only blind airman serving in the United States Air Force. He also received the Bronze Star With Valor for heroism on the battlefield.

Xxon is a game-changer for the entire Malarsie family. He provides increased freedom and independence not only for Michael, but for his wife, Jesse, too. “When Xxon is working with Michael, I don’t feel that I have to watch out for him every minute,” said Jesse, “I can focus on being a mom to our children.” And Michael agrees, “I can get around in half as much time and my confidence is way up. I’m excited to be out and in society again.” Michael added, “I’m so lucky to be alive. Being blind is such a small thing; I’m not going to let it slow me down at all. I don’t know where I’d be now if it weren’t for Xxon.”

As the point person for an explosive ordinance disposal (EOD) team in Kirkuk, Iraq, it was Matthew’s job to “take the long walk” to determine what sort of bomb his unit faced and safely disarm it. On October 24, 2007, as Matthew slid his probe under the bomb, it blew up two feet from his face. Thrown 30 feet from the blast site, he suffered a mangled left arm that was immediately amputated, a shattered face and the loss of vision in both eyes.

“I had always wanted a German shepherd and was familiar with them from my time in the Air Force,” he said. “When I found about Fidelco and their German shepherds, that was it for me. Nothing else would do.”

After many discussions with Matthew’s rehabilitation specialists, including a prosthesis expert, the Fidelco staff found the right combination of harness and handle to accommodate Matthew’s physical injuries. He was partnered with his Fidelco Guide Dog “Legend” in 2008. “I began to see a glimmer of hope that while many of my dreams had been left in the dirt of Kirkuk, there were new goals that I could set for myself with Legend’s help,” said Slaydon.

Each Fidelco Guide Dog takes two years, 15,000 hands-on hours and $45,000 to produce. They are given to clients at no cost. Fidelco provides 24/7 client support for the entire working life of its guide dogs – typically 10 years. Fidelco relies solely on the generosity and financial support of individuals, foundations, corporations and civic organizations to help Share the Vision®.

Fidelco has trained and placed over 1,350 German Shepherd Guide Dogs throughout North America – in 41 states and five Canadian provinces. Fidelco pioneered In-Community Placement in the United States — a process that allows all guide dog users to be trained in the communities where they live and work.