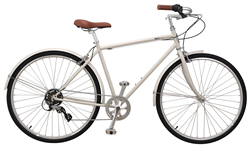 The new Bedford and Franklin models are unique in their price point as we really pushed to work in unexpected components and mechanics.

Urban bike brand Brooklyn Bicycle Co. have unveiled the first two new models from their 2014 series. Bedford and Franklin bicycles are now available in dealer stores and on the brand’s recently rebranded website (http://www.brooklynbicycleco.com). These models introduce an expansion of the company’s city bike range to include consumer friendly, value-based bicycles.

Brooklyn Bicycle Co. bikes are now sold in over 85 locations across the USA and Canada. If the company does not have a shop in a customer’s city, they will ship it to a local bike shop and have it assembled for free through its Buy & Ride program.

“We made a conscious decision to introduce options meant to advance city bike accessibility without compromising quality or style,” said Brooklyn Bicycle Co. President Ryan Zagata. “The new Bedford and Franklin models are unique in their price point as we really pushed to work in unexpected components and mechanics. Our goal has always been to get everyone who wants to ride on a bike. These models help get that done,” he added.