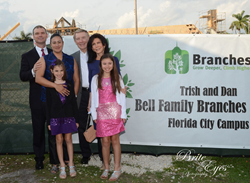 We are extremely grateful to have the opportunity to support an organization like Branches that so effectively and lovingly provides life-changing opportunities to so many families in our community. -Trish Bell, Chairman of Branches' Advisory Committee.

Branches celebrated the official groundbreaking ceremony of its Branches Florida City building project on Wednesday, February 26th. The project is located at 129 SW 5th Avenue, Florida City. At the groundbreaking, the name of the facility was unveiled as the Trish and Dan Bell Family Branches Center – Florida City Campus. The new facility is scheduled to open its doors by September 2014. Branches provides holistic and long-term services to help families break the cycle of poverty through educational opportunities, financial stability services, after-school programming, youth development, hunger relief and much more.

Trish and Dan Bell have been anonymously supporting Branches since 2005 through generous matching grants and an endowment for summer camp scholarships provided to children. Combined, they have contributed or pledged nearly $7,000,000 to the organization to date. During this timeframe, Branches has scaled operations from one site and less than 1,000 served to four sites throughout Miami-Dade County serving over 11,000 children, youth and adults each year. The organization has grown to nearly 60 employees and is supported by over 150 active volunteers. Branches has a 100% high school graduation rate among its students who have stayed in the Branches program through high school, and it currently has 19 of its students in college, many of whom are the first in their families to attend college.

The transformational impact of the Bells’ support was conveyed by Brent McLaughlin, Branches Executive Director, “The Bells first encouraged us to dream of the possibilities and then enabled us to achieve the vision through game-changing and unprecedented support of the organization through several matching grants. They have been and continue to be a blessing for so many. We are forever grateful!”

Branches Florida City was founded by the United Methodist Church, and began very simply by serving 20 children over 20 years ago. Today the programs serve several hundred but the dream of serving even more children and families through a new facility is becoming a reality. The new 11,000 square foot facility, built on land donated by the United Methodist Church, will enable Branches to more than triple the number of children and families currently being served, which is sure to have a long-term positive impact on this community. The new building will feature several classrooms, a recreation room, a computer lab, a large covered patio space, a new playground and a large multi-purpose room that will be used by Branches as well as the Branches United Methodist Mission. Branches Florida City will also house the United Way Center for Financial Stability of South Dade, which will provide financial coaching and trainings.

The Bell family attended the groundbreaking ceremony, including Trish, Dan, their son Rod who is the current Branches Board Chair, along with his wife Sandy and their two daughters, Reese and Riley. Branches is grateful for the generous support that Trish and Dan Bell have provided over the last many years, which currently includes two new matching grants of up to $530,000 to complete the Branches Capital Campaign, and up to $900,000 for the annual operational campaign.

To support Branches and make a gift to either the Building Up Branches Capital Campaign or the annual operational campaign, please contact Isabelle Pike at ipike(at)branchesfl(dot)org or 305-442-8306 x1002.

About Branches
For 40 years, Branches (formerly South Florida Urban Ministries) has made a positive impact in the community by delivering on its mission to serve, educate and inspire people through student, family and financial stability services. Branches provides long-term, holistic services for motivated individuals and families. We help people grow deeper and climb higher in life by building a foundation through education so they can achieve their goals and fulfill their potential.

About the Bells
Since making Miami their home in 1977, Trish and Dan Bell have been deeply engaged in supporting the Miami-Dade community with their leadership and philanthropy. They currently serve together as Co-Chairs of the Board of Trustees of the Patricia and Phillip Frost Museum of Science; as founding members of the Advisory Committee of Branches; and as Trustees of the Florida United Methodist Children’s Home. Trish is also the Chairman of the Board of Trustees of Chapman Partnership. In addition to Branches, the Bells are also major philanthropic supporters of the Frost Science Museum, Chapman Partnership, and the Children’s Home as well as numerous local social service and cultural organizations. Now retired, Dan co-founded Kos Pharmaceuticals in Miami in 1988 and led the company, as CEO then Chairman, until its sale in 2006. Their son Rod Bell, is Chairman of the Board of Trustees of Branches and a partner in the national law firm of Holland & Knight. Recently Rod was awarded the Greater Miami Chamber of Commerce NOVO award for Outstanding Board Leader for his service as Chair of the Branches Board of Trustees.