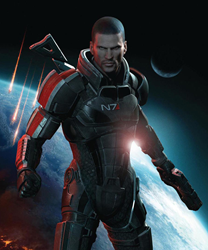 Stay tuned for more ‘Gargoyles’ and Mass Effect announcements in the coming weeks, as well as other exciting plans still in the works.

DCC will host a 20th anniversary reunion of many of the talents who worked on “Gargoyles” with actors Salli Richardson-Whitfield, Thom Adcox-Hernandez and series creator Greg Weisman. The con will also feature a Mass Effect session with Raphael Sbarge, Mark Meer and Kimberly Brooks with more guest additions coming soon.

“When we’re booking guests for DCC we try to provide a little something for every attendee,” said Bruce MacIntosh, chairman of CBC and director of programming for DCC. “Getting the ‘Gargoyles’ group together for the 20th anniversary and so many of the people behind Mass Effect provides synergy to the sessions we’re providing. What’s more, we’re always looking to add to these synergies—stay tuned for more ‘Gargoyles’ and Mass Effect announcements in the coming weeks, as well as other exciting plans still in the works.”

DCC has a complete and ongoing list of announced guests at its website, which includes notables such as Bruce Campbell of “Burn Notice” and “Evil Dead” and Michael Rooker from “The Walking Dead” in addition to today’s announced guests.

“Gargoyles” 20th Anniversary Guests (to date)
Salli Richardson-Whitfield – In addition to voicing Elisa Maza in the Disney animation classic “Gargoyles,” Salli is known to millions of fans as Dr. Allison Blake in SyFy’s “Eureka.” She's has appeared in more than 20 major motion pictures including: “I Am Legend” with Will Smith, “Antwone Fisher” with Denzel Washington, “Low Down Dirty Shame” with Keenen Ivory Wayans, and “Posse” with Mario Van Peebles. She is starring in two upcoming motion pictures, “Pastor Brown” and “We The Party.” Salli has also appeared in dozens of popular television series, including “Criminal Minds,” “Bones,” “House, MD,” “NYPD Blue,” “CSI: Miami” and as Viveca Foster on “Family Law.”

Greg Weisman – Greg is best known as the creator of “Gargoyles.” He’s also the supervising producer of “The Spectacular Spider-Man” and is the executive producer on the highly-anticipated new animated Disney XD series, “Star Wars Rebels,” premiering in the fall of 2014. Weisman has also worked as producer on the “Young Justice” animated series, wrote the script for “DC Showcase: Green Arrow,” an animated short feature that is included on the DVD for the film, “Superman/Batman: Apocalypse.” Greg’s first novel, “Rain of the Ghosts” was released on December 3, 2013.

Thom Adcox-Hernandez – Thom is known for his voice work in “The Twisted Tales of Felix the Cat” and “Young Justice: Legacy,” and of course, as Lexington in Gargoyles. In addition to voice acting, Thom is known for his roles in “Under Siege 2: Dark Territory” and the prime-time soap opera, “Falcon Crest.”

Raphael began his acting career on “Sesame Street” at the age of five, but most recently he can been seen on ABC’s “Once Upon a Time” as Dr. Archie Hopper/Jiminy Cricket. Additionally, Raphael voiced the character Professor Zei in a guest-star appearance on the thirtieth episode of Nickelodeon's “Avatar: The Last Airbender.”

Mark Meer – Mark voices Commander Shepard in the Mass Effect games as well as in a number of other games from BioWare Corp., notably the Baldur's Gate and Dragon Age series. Meer also works in animation, providing the voice for characters in a series of cartoon shorts produced by Rantdog Animation Studios.

Kimberly Brooks – Kimberly has been working in video games since the mid-1990s. In addition to voicing the role of Ashley Williams in Mass Effect, she also appeared in Dragon Age: Origins and voiced characters in Batman: Arkham Asylum and Batman: Arkham City. Kimberly is also known for her animation voice acting, including several parts in “Ben 10 Omniverse” and “Ultimate Spider-Man.”

For more information about Comic Book Classroom or Denver Comic Con and to purchase tickets visit http://www.ComicBookClassroom.org or http://www.DenverComicCon.com.