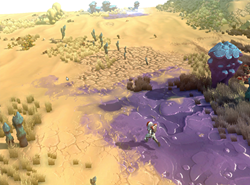 The creators of Proven Lands have been working on their dream game with a small indie team for some months now. A free pre-alpha tech demo has been released for their Kickstarter campaign.

"I believe that people have been waiting for such a science-fiction game for years. In the future, when procedural 3D games become common, the players will probably have a better understanding of the game mechanics, the level design advantages and the technical challenges of such a game,” Rafael Wawer said.

Proven Lands is expected to be released in Q2 2015 – first on Windows, then on iOS and OS X, followed by Android and Linux, thanks to Unity. A Kickstarter campaign for Proven Land has just been launched.

Pascal Blanche, Art Director at Ubisoft, Montreal, about Proven Lands: “Someone finally gets the potential of procedural alien worlds."

Rock, Paper, Shotgun about Proven Lands: “The catchiest way to describe it would be ‘sci-fi Don’t Starve,’ but that’s far, far, far too simplistic.”

thesetales Ltd., an indie game company, is based in Berlin, Germany, and Liverpool, UK.

The small and ambitious team behind Proven Lands consists of two veterans and a couple of great talents. Rafael, a professional engineer with an experience of 10+ years, started to work on games as a kid. Rafael refused a generous offer to become CTO of the merchandising arm of an established animated movie company in order to team up with Moritz. Moritz, on the other side, has vast business experience, with a strong focus on Legal and Finance and a passion for addictive games.