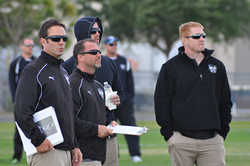 Together, Justin and I plan on running several camps across the country where we can share our expertise through experience. - Michael Husted

Go here for information on the NCS Championship Camp in Indianapolis, IN, on March, 16, 2014.

“I'm looking forward to our first NCS Championship Camp in Indianapolis on Sunday,” says Husted. “Having partnered with NFL long snapper Justin Snow is another example of our mission to create a network of expert coaches in the kicking game.”

Snow, who played 12 seasons with the Indianapolis Colts, says he is looking forward to working with Husted in helping young long snappers achieve their goals.

“My time on the field has come to an end but now I feel called to share my talents and knowledge with others,” says Snow. “I've learned many skills that have impacted my game and I am eager to pass along to fellow long snappers. I feel very fortunate to have played at the highest level with some of the greatest athletes in the world. Now I feel called to help other long snappers reach their goals and dreams not only on the field but in everyday life.”

“I have teamed with NCS and Michael Husted, one of the best in the industry,” says Snow. “Ironically our paths crossed early in my career with the Indianapolis Colts. Now we are working together again trying to help other Kicking Specialists showcase their talents all over the country. Together we feel we can make a difference and help others advance to the next level of their careers.”

Husted says this is just the first camp he and Snow will be conducting.

“Together, Justin and I plan on running several camps across the country where we can share our expertise through experience,” says Husted.

Husted says the NCS Championship Kicking Camps are a recent addition to the kicking camps selection offered by the National Camp Series (NCS).

“The Championship Camps are full day camps are a nice addition to the National Camp Series, which already includes our Divisional Evaluation Events and our annual Super Camp,” says Husted. “These camps include our proprietary Kicking Index Evaluation (KIX), professional instruction by NFL players and conclude with competition in field goals, kickoffs, punts and long snapping.”

Husted, who kicked in the NFL for 9 years, says NCS Championship Camps are a great opportunity for high school specialists to get instruction from coaches of the highest caliber, and to be evaluated objectively.

“Having the opportunity to get instruction by retired NFL players who have succeeded at all levels of football, be accurately and fairly evaluated using our Kicking IndeX (KIX) Player Rating System, and getting to compete will ensure that this camp will be the most comprehensive camp available,” says Husted.

Go here for information on the NCS Championship Camp in Indianapolis, IN, on March, 16, 2014.