Violinist Nazrin Rashidova and guitarist Stanislav Hvartchilkov joined forces for a special concert in London to showcase their arrangements of works by Tofig Guliyev. The concert was organised by The European Azerbaijan Society. 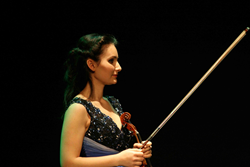 Nazrin Rashidova is one of the brightest young Azerbaijani artistes.

The Azerbaijani-born London-resident violinist Nazrin Rashidova teamed up with Bulgarian guitarist Stanislav Hvartchilkov on 12 March for a special concert at King’s Place, London, launching their 'Dreams' CD. The European Azerbaijan Society (TEAS) sponsored the concert, which was attended by around 120 music-lovers. The concert was also the first entry in the ‘TEAS presents…’ series of cultural events.

Violinist Sabina Rakcheyeva, Arts and Culture Adviser, TEAS and the first Azerbaijani graduate from the Juilliard School of Music in New York commented: “It is our pleasure to support the launch of the 'Dreams' CD. One of TEAS’ objectives is to promote Azerbaijani culture to European audiences.

“The ‘TEAS presents’ series will encompass concerts, exhibitions and book launches. Nazrin Rashidova is one of the brightest young Azerbaijani artistes. Coming from a musical family, I recall some of her early performances at the Azerbaijani State Philharmonic Hall in Baku. Since that time, she has evolved into a fantastic musician and has founded FeMusa – the only all female string ensemble in the UK. Stanislav and Nazrin initially collaborated whilst they were studying at the Royal Academy of Music.”

The programme comprised the musicians’ arrangements of 20th century song classics by the prolific composer Tofig Guliyev (1917–2000). Immersed in both classical and jazz music, he wrote scores for more than 40 Azerbaijani films from 1941, many of which achieved considerable popularity across the Soviet Union. Mr Guliyev was most famous for his collaboration with the dashing Azerbaijani lyric tenor Rashid Behbudov, who introduced many of his songs to post-war cinema audiences.

Mr Guliyev received the Istiglal Independence Order in 1998 from former President Heydar Aliyev, being the highest honour from Independent Azerbaijan. During the Soviet period he received the Medal for Heroic Labour and was named as a People’s Artist of Azerbaijan.

After performing the traditional piece 'Sari Gelin', the evocative programme included 'A Song About Baku'; 'Friendly Country, Azerbaijan'; and the titular 'Dreams'. All selections attracted a great deal of applause, particularly from the Azerbaijanis in the audience who knew the songs from their childhood. The concert concluded with a foretaste of Nazrin and Stanislav’s next CD – their inventive variations on 'The Carnival of Venice'.

An entertaining film compilation of archive clips from Azerbaijani musicals was screened in the interval, showing the audience how Tofig Guliyev’s songs were originally presented in the 1940s and 50s.

The event concluded with the signing of copies of the 'Dreams' CD by the two artistes. The CD is available online at http://bit.ly/nazrincd.