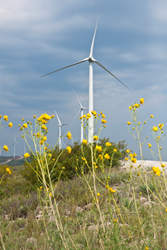 Green Power Offsets, a subsidiary of EDP Renewables North America LLC., and one of the nation’s premier providers of site-specific renewable energy credits (RECs), is excited to announce its donation of 200,000 kilowatt-hours of RECs to offset the greenhouse gas emissions associated with the electricity use of the 2014 Environmental Film Festival In The Nation’s Capital.

The RECs will avoid an estimated 151 tons of carbon dioxide emissions. “Without this donation, the power consumption of the offices, venues, and film screenings of the Environmental Film Festival would have generated an amount of carbon dioxide equivalent to over 15,000 gallons of consumed gasoline,” said Green Power Offsets’ Stephan Blasilli. “Green Power Offsets is proud to support the Environmental Film Festival’s mission of advancing the public’s understanding of the environment through film, and to help its decision to lead by example in reducing its carbon footprint and choosing responsible, clean, and renewable energy.”

“The Environmental Film Festival is proud to partner with Green Power Offsets as we present our 22nd annual program,” said EFF Executive Director Peter O’Brien. ”Their generous donation of RECs is a vital part of our organization’s commitment to sustainability, making it possible for us to partner with 65 venues across Washington while minimizing our carbon footprint.”

About the Environmental Film Festival in the Nation’s Capital
Founded in 1993, the Environmental Film Festival in the Nation’s Capital has become one of the world’s largest and most influential showcases of environmental film and a major collaborative cultural event in Washington, D.C. Each March the Festival presents a diverse selection of high quality environmental films, including many Washington, D.C., U.S. and World premieres. Documentaries, narratives, animations and shorts are shown, as well as archival, experimental and children’s films at venues throughout the city. Films are screened at partnering museums, embassies, libraries, universities and local theaters and are attended by large audiences. Selected to provide fresh perspectives on global environmental issues, most Festival films are accompanied by discussions with filmmakers, environmental experts and special guests, including national decision makers and thought leaders, and are free to the public. The Festival’s web site - http://dceff.org/ - serves as a global resource for environmental film throughout the year. For general inquiries, please e-mail info(at)envirofilmfest(dot)org.