The “Asking For Directions” Complex - PsychTests.com Study Reveals That Female Employees Are More Coachable Than Males

Wives and career coaches have at least one challenge in common: A study by PsychTests.com using their Coachability Test reveals that men are less willing to take direction and criticism. 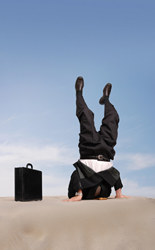 Men tend to bury their head in the sand when it comes to taking direction and absorbing feedback.

Coaching is just a means to bring out your full potential, and is in no way a sign that you are incompetent.

Executive coaching is a serious business. U.S. companies are spending more than one billion every year on coaching services. So one would hope that all employees would be open to the idea of receiving this type of guidance, but research from PsychTests performed with their Coachability Test reveals that male employees may prove to be a challenge.

Athletes understand the importance of listening to a coach. Even the “prima donnas” of the sports world know that not heeding a coach’s instruction could translate into trouble, or at least less playing time. Putting ego aside and swallowing pride is necessary when receiving feedback or coaching, whether in the sports or business world. The problem is that a lot of people are unwilling to accept guidance from others – and according to data from PsychTests, this applies to men in particular.

Here’s how men and women compared:

Other differences between men and women:

During a performance review:

“To be able to accept help, feedback, criticism, and direction requires a degree of comfort with vulnerability – and this is what puts off a lot of people,” explains Dr. Jerabek, president of the company. “You have to be able to look at your performance and recognize that, even if you are an experienced professional, there are always areas where you can do better – where you can learn and grow. Coaching is just a means to bring out your full potential, and is in no way a sign that you are incompetent. Companies won’t spend billions of dollars on coaching for people that they don’t believe in.”

Researchers at PsychTests broached the subject of coachability with men of various ages and professions in order to better understand why men are less receptive. These were some of the responses … uncensored:

“Because men feel like they can do anything on their own without the help of a coach or anyone else. Just like if a wife asks her husband to call a plumber to fix the toilet – he’s most likely going to try fixing it himself before calling for help, just like getting directions and just like being coached. They feel powerless when they’re being coached; like they’re being molded into an image, or are inferior to the coach…which is why they tend to act out and say, ‘I know how to do it’ or ‘I know what I’m doing’. They don’t want to feel useless or inferior which makes them hard to coach because men are know-it-alls. We want to feel like we’re in control. We’re afraid of having our manhood taken away.” -Dario, 24 years old.

“Perhaps because traditionally men view a need for help (or improvement) as weakness. Same reason they don't like to ask for directions.” -Tom, 52 years old.

Want to assess your level of coachability? Go to http://testyourself.psychtests.com/testid/3478

Professional users of this assessment (HR professionals, therapists, coaches and consultants) can request a free demo of this or any other tests from ARCH Profile’s extensive battery: http://hrtests.archprofile.com/testdrive_gen_1 or download a free 37-page fact-packed eBook about using psychological tests for pre-employement, talent retention and other HR purposes: http://hrtests.archprofile.com/personality-tests-in-hr