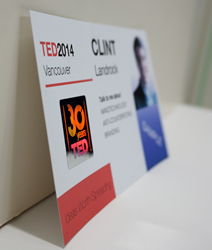 This year’s TED participants have one of the most technologically advanced conference ID badges ever made.

Nanotech Security Corp. (TSX-V: NTS) (OTCQX: NTSFF) is pleased to announce that it has been selected to design and produce an exclusive event access ID and branding solution for the TED2014 and TEDActive 2014 conferences. Nanotech’s next-generation KolourOptik® nanotechnology will be integrated as a security feature on each participant’s ID badge for both events.

The feature is a combination of TED’s iconic logo and ultra-high resolution lettering recognizing TED’s 30-year milestone delivering “Ideas Worth Spreading.” KolourOptik technology produces intense optically variable images that can be applied to virtually any surface for anti-counterfeit and branding purposes. These fully customizable images result from billions of nano-scale surface holes per square centimeter which capture and reformulate light waves into brilliant colours without use of any pigment or dye. The commercial terms of the contract were not announced.

Nanotech CEO Doug Blakeway commented, “Helping safeguard access to these conferences and capturing the brand was important to TED. What we have created for TED’s ID badges does both. This year’s TED participants have one of the most technologically advanced conference ID badges ever made. The badges will feature images that are imprinted with over 50,000 dpi resolution; that’s 150 times sharper than Apple’s Retina display.”

Mr. Blakeway added, “Every TED event brings together amazing people from around the world to witness and discuss ideas that are worth spreading. This collaboration demonstrates one of the many diverse applications of our world-class security product, and we are excited to see KolourOptik nanotechnology showcased first-hand to such a top-tier audience.”

About Nanotech Security
Nanotech Security Corp. has been a leading innovator in the design and commercialization of advanced security products and solutions for a number of years. Nanotech’s KolourOptik® and Plasmogram® are nanotechnology based product platforms originally inspired by the unique optical properties of the iridescent wings of the Blue Morpho Butterfly. Nanotech images produce intense, high definition OVDs (optically variable devices) that are ideal for brand authentication and for distinguishing currency, documents, personal identification, consumer electronics, and more from counterfeiters. KolourOptik creates unique, easy to authenticate images through interaction of natural light with nano-sized arrays of surface indentation structures which are on the order of a billionth of a meter in size. These nanostructures create vivid colour images, activated by a simple tilt or rotation, with higher resolutions than the best LED-displays. Additional information about Nanotech and its technologies can be found at http://www.nanosecurity.ca or http://www.sedar.com.

About TED
TED is a non-profit devoted to Ideas Worth Spreading. It started out in 1984 as a conference bringing together people from three worlds: Technology, Entertainment, and Design. Since then its scope has become ever broader. Along with three annual conferences -- the TED Conference, TED Active, and TED Global -- TED includes the award-winning TED Talks video site, the Open Translation Project and TED Conversations, the inspiring TED Fellows and TEDx programs, and the annual TED Prize. TED is one the world’s most renowned conferences, and this year marks TED’s 30th Anniversary of bringing together the world’s greatest minds.

On Behalf of the Board of Directors of
Nanotech Security Corp.