With Phase I SBIR funding through NASA, Air Squared has designed, fabricated, and tested a scroll pump for use with cryogenic liquids. 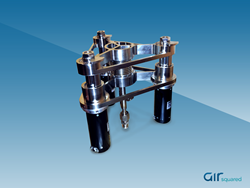 Air Squared, Inc. has created the world’s first small-scale scroll pump for cryogenic liquids. The innovation is a compact, reliable, light-weight, and electrically-driven scroll, capable of pumping volatile liquids at extremely low temperatures. It is based on oil-free scroll technology, which Air Squared has pioneered for nearly 25 years.

Developed for NASA, the pump is designed to efficiently move low-temperature liquids in zero gravity cryogenic control devices. With numerous aerospace applications, the design could be used as a fuel pump for liquid hydrogen-fueled aircraft.

The scroll pump was developed as part of a Phase I Small Business Innovation Research grant (SBIR). The SBIR specifically asked for the design, fabrication, and testing of the world’s first small-scale positive displacement cryogenic pump. The SBIR was awarded to Air Squared on April 1, 2013, with Phase I completion on November 23, 2013.

The project was a success, with execution of a very challenging concept. Testing did illuminate a motor issue, resulting from pumping at low-temperatures. Based on the results, Air Squared has engineered potential motor solutions and other design improvements. If awarded a Phase II SBIR, the new design will be fully tested in a zero gravity environment with additional cryogenic fluids.

Air Squared is the industry leader in oil-free scroll design and manufacturing. By introducing a simple design with fewer moving parts, scroll technology has established itself as a highly efficient, very reliable, cost-effective alternative. Through a growing line of compressor, vacuum pumps, and expanders, Air Squared makes the many advantages of oil-free scroll technology available to OEMs worldwide. More information on Air Squared, Inc. is available at http://airsquared.com.