Concerned that the World Economic Forum, the IMF - International Monetary Fund, and World Bank documents do not reflect recent evidence that global warming stopped 16+ years ago before Kyoto was ever implemented, Friends of Science have launched a digital campaign on a massive superboard at the Calgary Airport - YYC to welcome them...if they come. The World Economic Forum on climate change and energy was slated to arrive in Calgary to confer in beautiful Lake Louise April 24-25, but recent flip-flop comments by the Alberta government have shrouded the event with uncertainty; undeterred the Friends of Science billboard will reach them “...via the internet if not in person” says Len Maier, president. 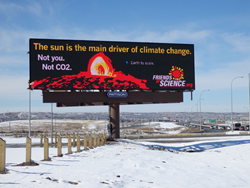 Does the World Economic Forum fear being in the same province as the ‘tar sands’, where reclamation is the law, while enjoying the most beautiful, pristine spot on earth at Alberta’s Lake Louise?

As announced Jan 21, 2014 in the Globe and Mail, when the World Economic Forum arrives in Calgary...or if they do… they will be greeted by a massive digital superboard stating that the sun is the main driver of climate change, not you and not CO2, courtesy of Friends of Science.

Following Alberta Premier Alison Redford’s participation at Davos, Switzerland in Jan. 2014 the pending World Economic Forum conference was slated to be held at Lake Louise, Alberta was and was billed as bringing together 100 leaders to talk about energy and environmental sustainability.

Recent March 10, 2014 Calgary Herald reports indicate something has gone awry. The conference may...or may not...happen, depending on who you listen to.

“Does the World Economic Forum fear being in the same province as the ‘tar sands’, where reclamation is the law, while enjoying the most beautiful, pristine spot on earth at Alberta’s Lake Louise?” mused Len Maier, P. Eng. and president of Friends of Science.

“Perhaps the World Economic Forum were afraid of seeing Calgary, ranked #5 in the world for 'liveablity' for best quality of life, cleanest, most family friendly, renown for its Calgary Stampede white-hatted Western hospitality. This would destroy the myth of dirty old, greedy tar sands miners, that the world’s ENGOs have foisted upon us,” says Maier, shaking his head.

The Economist Intelligence Unit ranked Calgary 5th most liveable city in the world, reported by the Calgary Herald August 29, 2013.

Maier points out that the World Economic Forum may also have been deterred by the world’s largest concentration of earth and atmospheric scientists and professional engineers in Alberta - with the Association of Professional Engineers and Geosciences of Alberta (APEGA) membership numbering some 70,000+. A recent survey in Organizational Studies reported on by Forbes peer-reviewed study Feb. 13, 2013 finds some 56% of APEGA scientists strongly disagree with the dangerous Anthropogenic Global Warming theory expounded by the Intergovernmental Panel on Climate Change (IPCC).

The survey entitled “Science or Science Fiction? Professionals’ Discursive Construction of Climate Change” by Lefsrud and Meyer reports most respondents felt climate change was a natural process and human impact posed a minimal risk to the public and little or no personal risk. [The survey discounted 7.9% participants as ‘disguised’ and only 36% as “Comply with Kyoto”].

Friends of Science president Len Maier is an APEGA member and P. Eng. and states that the Alberta Geoscientists take a pledge during their admissions ceremony: "I will not pass, ... false information or too casual interpretations in my work as an Earth scientist.”

“We all hold to these principles,” says Maier. “So we are making our best efforts to educate the World Economic Forum, IMF and World Bank whether they arrive here or not, that the sun is the main driver of climate change. Not you. Not CO2.”