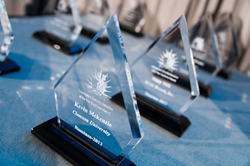 Nominations for the ISE® Canada Awards will be accepted now through June 20, 2014.

Canada is on the cutting edge of security, privacy and risk endeavors and we encourage the executives and project teams who are leading the charge to submit a nomination and join the ranks of distinguished ISE® Alumni...

T.E.N., an information technology and security executive networking and relationship-marketing firm, announced today that nominations will be accepted now through June 20, 2014 for the 2014 Information Security Executive® (ISE®) Canada Awards.

Awards include the Information Security Executive® of the Year, which recognizes executives who have made a positive impact on their organizations through risk management, data-asset protection, regulatory compliance, privacy and information security; and the ISE® Project of the Year, which recognizes a project completed during the previous 12-18 months that has had a significant impact on an organization’s risk management or information security posture. Eligible nominees meet all appropriate criteria and are based anywhere in Canada.

Executives and/or project teams can be self-nominated in addition to entries by supervisors, employees, peers or technology partners. Anyone interested in nominating for the ISE® Canada Awards may download the forms here. All nominations are sent to T.E.N.’s distinguished panel of ISE® Judges for review and scoring.

“Our first ISE® Canada Executive Forum and Awards program last September was extremely well received and we are thrilled to return in 2014,” said T.E.N. CEO & President Marci McCarthy. “Canada is on the cutting edge of security, privacy and risk endeavors and we encourage the executives and project teams who are leading the charge to submit a nomination and join the ranks of distinguished ISE® Alumni.”

Nominees, finalists and winners will be recognized at the ISE® Canada Executive Forum and Awards on Sept. 10, 2014 at the Trump International Hotel & Tower in Toronto, ON. The Executive Forum will include keynote speakers, interactive roundtables moderated by the CISOs and VPs of participating companies and panel discussions. Finalists and winners in both categories are announced at the awards gala that evening and recognized through press coverage and inclusion on the T.E.N. and ISE® websites. Organizations taking part in previous programs have included leading organizations, such as Symcor, Telus, ScotiaBank, TD Bank Group and Bombardier Aerospace.