Now on view at the Buffalo Bill Center of the West is an exhibit that honors western artist Harry Jackson (1924 – 2011) on the occasion of his 90th birthday. During his remarkable career, Jackson was at the forefront of American artistic movements after World War II, but in 1956, Jackson did something altogether unheard of— he left New York and moved back to Wyoming. 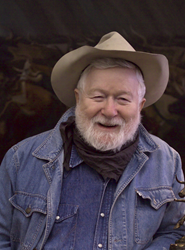 “Harry Jackson was an art pioneer because he rejected abstract styles and returned to realism for his paintings and sculpture that focused on themes of the American West,” explains Mindy Besaw, Whitney Western Art Museum Curator at the Buffalo Bill Center of the West. “He brought deserved attention to art that had been largely dismissed as mere illustration and left an impressive legacy for today’s western American art.”

Born in 1924 in Chicago, Jackson ran away from home at a young age to become a cowboy at the Pitchfork Ranch, near Meeteetse, Wyoming, a move that inspired so much of his artwork about the American West. He served in World War II as a Marine combat artist, studied art in New York after the war, and then returned once again to Wyoming, making Cody his home until his death in 2011.

Jackson trained as a painter and experimented with many different styles, including Abstract Expressionism. At first, Jackson’s sculptures were only studies for his paintings. After studying in Italy, however, he began devoting more time and attention to sculpture than to painting.

“Without a doubt, Harry Jackson, can be credited as the artist who, more than any other, resurrected a dying genre of figurative art based on western subjects in the 1950s and 1960s,” Besaw continues. “To categorize Jackson simply as a contemporary western American artist, however, is shortsighted…[his] western bronzes were only one aspect of his astonishing career. Jackson’s life experiences and varied artistic influences contributed to his overall success as an important twentieth-century American artist.”

The "Art of Harry Jackson" is on view through March 2015. Read more about Jackson on the Center's website. For additional information, contact Besaw at mindyb(at)centerofthewest(dot)org or 307-578-4053.

Since 1917, the Buffalo Bill Center of the West has been committed to the greatness and growth of the American West, keeping western experiences alive. The Center, an affiliate of the Smithsonian Institution, weaves the varied threads of the western experience—history and myth, art and Native culture, firearms, and the nature and science of Yellowstone—into the rich panorama that is the American West. The Center is currently operating its spring schedule, open daily 10 a.m. – 5 p.m. For additional information, visit the Center's website of its pages on Facebook and Google+.