From March 14 to June 11, Panda will reward new customers with one month of additional protection for each goal scored by their chosen team in this summer’s World Cup. 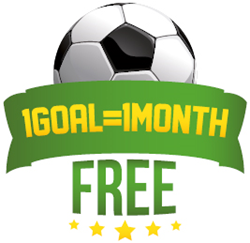 Given the worldwide popularity of soccer, and the imperative need to protect our PCs and mobile devices, this is a natural and fun campaign to reward our customers.

Panda Security, The Cloud Security Company, today announced the launch of The World Cup Giveaway, a new campaign offering users the chance to win one month of additional protection for their consumer solutions in exchange for the goals scored in the World Cup in Brazil, June 12 to July 13. The giveaway, which runs from March 14 to June 11, rewards customers around the world for each goal scored by their chosen team in the 2014 Soccer World Cup.

How to Participate in the World Cup Giveaway

“We love soccer and computer security, and we are sure this promotion will be very well received among users. We already have participants from from the 80+ countries where we operate, including the US, Spain, Germany, England, France, Brazil and many others. Given the worldwide popularity of soccer, and the imperative need to protect our PCs and mobile devices, this is a natural and fun campaign to reward our customers,” said Álvaro Elorriaga, Worldwide Retail Director at Panda Security.

Channel Initiatives
In addition to its World Cup Campaign aimed at end users, Panda Security will also launch a number of local initiatives with the distribution channel in the different countries where Panda operates.

The giveaway terms and conditions are available at http://www.pandaworldcup.com.

About Panda Security
Founded in 1990, Panda Security is the world’s leading provider of cloud-based security solutions, with products available in more than 23 languages and millions of users located in 195 countries around the world. Panda Security was the first IT security company to harness the power of cloud computing with its Collective Intelligence technology. This innovative security model can automatically analyze and classify thousands of new malware samples every day, guaranteeing corporate customers and home users the most effective protection against Internet threats with minimum impact on system performance. Panda Security has 80 offices throughout the globe with US headquarters in Florida and European headquarters in Spain.

Panda Security collaborates with The Stella Project, a program aimed at promoting the incorporation into the community and workplace of people with Down syndrome and other intellectual disabilities, as part of its Corporate Social Responsibility policy. For more information, please visit http://www.pandasecurity.com/.