5 Leadership Bounty Lessons from Spring Training with the Pittsburgh Pirates

Leadership expert and best-selling author Bill Treasurer held motivational leadership sessions for players and management of the Pittsburgh Pirates during their spring training session at Pirate City this month. Treasurer shares that he feels that he learned as much about leadership from the team as they did from him during their time together. 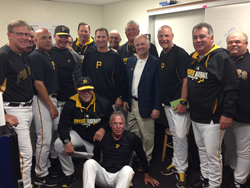 Treasurer, center-right, poses with the Pirates players and coaches between sessions.

I learned as much about leadership by spending two days at Pirate City than I have just about anywhere else.

Baseball spring training season is marked with a series of practices and exhibition games to prepare new and old players alike for the coming official season. This year’s Pittsburgh Pirates spring training at Pirate City in Bradenton, Florida also included leadership sessions with best-selling author Bill Treasurer. The invitation came after Clint Hurdle, the Pirate’s manager, read Treasurer’s latest book, “Leaders Open Doors.” What Treasurer didn’t realize was that he would learn as much about leadership from the Pirates in their two days together as he would offer the players and coaches. Below he shares his “Five Leadership Bounty Lessons From Spring Training with the Pittsburgh Pirates” as well as the leadership essential takeaways for leaders of businesses and organizations of all types.

Leadership Essential: Actively build leadership skills among your organization’s next generation of leaders to deepen the overall bench strength.

Leadership Essential: Thinking about leadership isn’t enough. Leadership is something you do. Provide real opportunities for people to lead and take charge.

Leadership Essential: Create an environment that encourages people to “own” their performance and mistakes. Embody personal accountability as a core value.

Leadership Essential: Fire people up with one or two quick motivational messages, not every motivational quote you’ve ever heard.

Leadership Essential: Get everyone striving for excellence by asking each person to improve performance by one tenth of one percent every day. It’s the best way to outperform average.

During his visit, Treasurer sensed a swelling level of confidence building in the Pirates franchise. After a twenty year losing streak, the longest in North American professional sports history, the team headed in 2013 to postseason play for the first time in twenty-one years. The season had built on the momentum that was created in 2012, when they won early in the season but later collapsed.

After reflecting on the experience, Treasurer shared, “I’ve been fortunate to have worked with some of the best organizations in the world, ranging from NASA to Saks Fifth Avenue. For over two decades I’ve designed, developed, and delivered leadership and succession programs for corporate and nonprofit clients. But I’m here to tell you, I learned as much about leadership by spending two days at Pirate City than I have just about anywhere else.”

Bill Treasurer is the author of "Leaders Open Doors," which focuses on how leaders create growth through opportunity. Bill is also the author of "Courage Goes to Work," an international bestselling book that introduces the concept of courage-building. He is also the author of "Courageous Leadership: A Program for Using Courage to Transform the Workplace," an off-the-shelf training toolkit that organizations can use to build workplace courage. Bill has led courage-building workshops for, among others, NASA, Accenture, CNN, PNC Bank, SPANX, Hugo Boss, Saks Fifth Avenue, and the US Department of Veterans Affairs. To inquire about having Bill work with your organization, contact info(at)giantleapconsulting(dot)com.