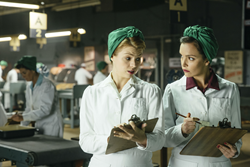 REELZCHANNEL today announced the two-hour television movie "Bomb Girls: Facing the Enemy" is set to premiere Monday, May 26 at 9pm ET/ 6pm PT, transporting viewers to a dark hour in the Battle for the Atlantic. Under constant pressure to turn out more bombs, as well as work on a new secret sonar line, the women of Victory Munitions band together in a tight bond of support and friendship. But when a disturbing menace appears in the form of a saboteur among the factory workers, Gladys Witham (Jodi Balfour), a fiery young woman from privilege, is covertly recruited by Allied Intelligence to find the traitor, forcing her to spy on her best friends, co-workers and fellow agents and call into question everyone and everything she trusts. "Bomb Girls: Facing the Enemy" also stars Oscar®-nominee and Golden Globe®-winner Meg Tilly as Lorna Corbett, Charlotte Hegele as Kate Andrews, Ali Liebert as Betty McRae, Anastasia Phillips as Vera Burr, Antonio Cupo as Marco Moretti, Peter Outerbridge as Bob Corbett, Michael Seater as Ivan Buchinsky, Jamie Elman as Jakob Berman, and Catherine Berube as Helen Buchinsky. Viewers have an additional chance to watch "Bomb Girls: Facing the Enemy" on Monday, May 26 at 11pm ET/ 8pm PT and again on Sunday, June 1 at 11am ET/ 8am PT.

“We are excited to share such an important story with our viewers this Memorial Day,” said Stan E. Hubbard, CEO of REELZ. “With its magnificent cast, compelling characters and superb production, 'Bomb Girls: Facing the Enemy' is the perfect way to honor our veterans and has appeal that spans generations.”

"This special movie brings our beloved Bomb Girls face to face with the very real danger of home grown sabotage as the Battle of the Atlantic rages and the fate of democracy hangs in the balance," says Michael Prupas, Executive Producer. "Meeting the challenge posed by domestic enemies brings the war home in a way that audiences are sure to love".

"Bomb Girls: Facing the Enemy" takes place in 1943 as the Battle for the Atlantic rages and an Axis victory seems inevitable. German U-boats patrol the ocean picking off ships, destroying much needed supplies and inflicting heavy casualties. The one hope the Allies have—production of newly developed sonar equipment—is moved to Victory Munitions when the British factories are bombed, and it’s the duty of the women at the factory to band together and fight for their country. "Bomb Girls: Facing the Enemy" is produced by Muse Entertainment and Back Alley Film Productions in association with Shaw Media

Although the movie can stand alone, viewers can gear up for "Bomb Girls: Facing the Enemy" when REELZ re-airs the first two seasons of the Gracie Award® winning, original drama series "Bomb Girls", starting on Sunday, April 13. Set in a time when society was experiencing fundamental changes in the workplace and at home, the first season of "Bomb Girls" presents the stories of the women who risked their lives in a munitions factory in support of the European front. Liberated from social and cultural restrictions, they embrace their newfound freedom, changing their lives—and the world around them—forever. Season two of "Bomb Girls" begins just after the attack on Pearl Harbor and draws viewers deep into 1942 with its music, fashion, romance and the thrill of being alive in dangerous times. A complete list of airdates and times is below:

Saturday, May 24
Season 1- all six episodes air back to back starting at 11am ET/ 8am PT

About REELZCHANNEL—Hollywood Happens Here™
REELZ is a leading independent cable and satellite general entertainment network, connecting its viewers across America with the magic, wonder and excitement of Hollywood wherever it happens. The network is home to cutting-edge reality, ambitious television events, miniseries, movies and series featuring big stories and big stars. Programming ranges from the critically-acclaimed and award-winning "The Kennedys" to "Hollywood Hillbillies", "Steven Seagal: Lawman" to "Beverly Hills Pawn", "OK! TV", "Hollywood Scandals" and much more that connects directly to the world of entertainment. Along with top movie and entertainment experts Leonard Maltin and Richard Roeper, the characters and stars of REELZ provide specific on-air recommendations for movies viewers can watch at home.