The Heroes Project is organizing a fund raising day hike to the summit of Mount Baldy on March 23, 2014 to help wounded veterans rediscover their strength and pride by scaling Mount Everest, the world’s highest peak, later this spring. Civic Duty, cofounded by Dr. Michael Omidi and Julian Omidi, is proud to support the Heroes Project and Sunday’s Climb for Heroes event. 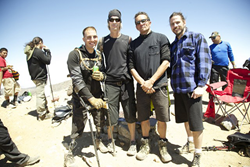 Civic Duty is proud to support the Climb for the Heroes 2014 fundraising event for the Heroes Project, a day hike of Mount Baldy on Sunday, March 23, 2014. The Civic Duty charity, cofounded by Julian Omidi and Dr. Michael Omidi, is an ardent supporter of The Heroes Project and its work on behalf of United States veterans. Funds raised by the climb will help pay travel expenses for The Heroes Project’s seventh climb of the highest peaks in the world – when injured marines, soldiers and veterans scale Mount Everest, the globe’s highest summit.

“The Heroes Project is a tremendous program that advocates for and attends to the needs of American veterans -- the heroic men and women who have given so much of themselves for our protection,” says Julian Omidi, Civic Duty cofounder. “The mountain climbs, in particular, are a very effective means of restoring hope and power to the lives of our wounded warriors. My brother and I are so excited about The Heroes Project, we’ve signed on as supporters of this month’s Everest Climb and are also helping to promote Sunday’s fundraising day hike. Please join us in supporting The Heroes Project and its extraordinary work.”

Sunday’s event is a non-competitive, family-friendly day hike accessible to all age groups and fitness levels. Mount Baldy is a ten thousand foot peak but the hike is designed with several camps/breaks with the fifth at the summit. Hikers can complete one or all four sections of the trek and will receive special commemorative coins at each camp. At the end of the day, coins can be traded for one of the many tremendous prizes available. The event’s largest fundraisers will also be recognized with terrific prizes.

Check-in on March 23, 2014 is from 8-10 a.m. with a hearty breakfast provided for all hikers. The climb begins at the top of the trail head in the Mount Baldy ski lift parking lot and continues on to the 10,000+ foot summit. The exact climbing route will be determined that morning by Tim Medvetz, founder of The Heroes Project. A safe and fulfilling day of outdoor fun is promised for all. Registration for Climb for Heroes hikers is open until midnight on March 21, 2014 at: http://heroes.convio.net/site/TR?fr_id=1060&pg=entry for a minimum donation of $100 per person. Detailed event information and photos of past Heroes Project climbs can be found at the same website.

The Heroes Project (http://www.theheroesproject.org) is a multifaceted charity dedicated to the care and support of United States veterans. The organization was founded by Tim Medvetz, a climbing and extreme sports enthusiast. Following a crippling motorcycle accident in 2000, Medvetz spent years rehabilitating himself and reflecting on his life’s purpose. He set his sights on scaling Mount Everest and spent four years training for it. In 2009 Medvetz founded the Heroes Project which has become the country’s leading advocate for veterans’ issues. An integral part of the charity’s programs are the expeditions led by Medvetz to help wounded veterans rediscover their strength and pride by scaling the world’s most challenging summits. To date, Medvetz has coached and supported tens of amputee veterans on transformative journeys to the summits of six of the highest peaks in the world.

Civic Duty (http://www.civicduty.org) is dedicated to mankind’s search for meaning and promotes the values of its founders, philanthropists Julian Omidi and his brother Dr. Michael Omidi. The charity’s mission is to inspire creative outreach, community service, and volunteerism through the stories of every-day people who are making an extraordinary difference in the world. Civic Duty does not accept monetary support, but instead encourages direct donations to the charities featured on the organization’s website. To get involved and help make a difference, send a message using the website’s Contact Us function. More information about Civic Duty can be found on Facebook, Pinterest, Google+, and Twitter.