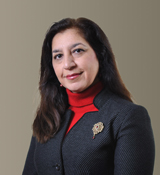 The article was misleading. No change had been made in the law. People were still free to give away their estate in whichever way they wished.

As a leading figurehead in the UK on Islamic Law, Aina was asked to comment on this headline and to explain whether "Islamic law is to be effectively enshrined in the British legal system" and whether “Under groundbreaking guidance, produced by The Law Society, High Street solicitors will be able to write Islamic wills that deny women an equal share of inheritances and exclude unbelievers altogether” as the Telegraph had claimed.

Aina stated; "The article was misleading. No change had been made in the law. People were still free to give away their estate in whichever way they wished. The Law Society had merely given recent guidance for Solicitors drawing up “Sharia Compliant” wills. There was an agenda in certain organisations to stir up discord where there is none".

Aina Khan regularly makes TV, radio and press appearances. She advises parliamentarians and academics on Islamic Family Law and frequently speaks at the Houses of Lords & Commons, Universities and conferences.

Duncan Lewis, established in 1998, is the largest civil legal aid practice in the UK and one of the country's fastest growing firms of solicitors, serving both corporate entities and private individuals from offices across London and throughout the UK. A recommended leading law firm by Law Society Lexcel, Legal 500; Duncan Lewis employs over 500 members of staff and was the first law firm to achieve the Investors in People Gold Quality Standard Mark in 2009. Representing over 25,000 clients per year, the company has an excellent reputation in the Administrative Court, High Court and Court of Appeal in the Immigration, Public law and Family/Child Care jurisdictions.