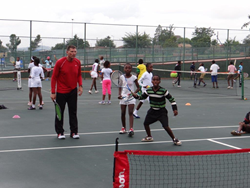 Israel Tennis Centers coach and global ambassador Ronen Moralli just returned from an unprecedented trip to South Africa in which he helped train local coaches and underprivileged youth at the Arthur Ashe Tennis complex in Soweto. As reported in a recent edition of South African Jewish Report, the program is the brainchild of Israeli Ambassador to South Africa Arthur Lenk, who sees tennis as an important opportunity to build cultural ties and show the real face of Israel to South Africans and the rest of the world.

“Israel is portrayed in such a negative light in the media and this program helps reshape those misperceptions,” says Moralli. “When I meet the people, they see an Israeli and can’t match it up to what they’ve been told to believe. Here is someone who cares, who shares, who extends respect and admiration. Seeing one another eye to eye has a big impact and helps undo some of the damage.”

These kinds of character building traits…respect, tolerance and understanding…are the essential life skills instilled in every young person who walks through the doors of ITC’s 14 centers throughout Israel. They are the cornerstone of the social impact programs of the Israel Tennis Centers where Moralli spent much of his early youth, and later as a coach for some of Israel’s finest athletes, including Davis Cup and Australian Open champions Andy Ram and Jonathan Erlich. He currently manages and coaches all of ITC’s boys and girls national teams and oversees coach education.

Since 1976 when the first facility opened in Ramat Hasharon, ITC programs have gone far beyond helping children become better tennis players. The real focus has been on becoming better human beings. Through its social impact programs, a wide range of children are served, including youth at risk, immigrants and children with special needs, from autism and ADHD to Down Syndrome as well as those with developmental and physical disabilities.

Tennis also has the unparalleled ability to bring together children from different religions in coexistence programs, promoting understanding, cooperation and friendship on and off the court. Coexistence creates an equal playing field for children from different religions through integrated programs for Jewish and Arab children, promoting understanding and encouraging friendships on and off the court. Starting with the very young in the Twinned Peace Kindergarten Program, the ITC encourages children and their families to engage in dialogue, set common goals and ultimately realize that they play on the same team.

Besides the breaking of stereotypes, the objective of Moralli’s visit was to help build the right platform for South African coaches who are helping local kids find their way forward in tennis. This means sharing techniques, establishing principles, models and structures that the ITC has used with great success in Israel. Of equal significance is the reverse side of the exchange program…a group of South African coaches and players that will be visiting Israel in the near future.

If the warm reception that Ronen Moralli and the Israel Tennis Centers received is any indication, this program is sure to enjoy a bright future for both Israel and South Africa. As Moralli himself noted, “It’s been done in soccer, cricket and rugby. It’s now time to start developing a black South African tennis champion.”

Below is a video clip from JN1 Television in South Africa on his trip:
http://jn1.tv/video/news/israeli-tennis-coach-visits-rsa.html

About the Israel Tennis Centers Foundation:
The Israel Tennis Centers Foundation (ITC) is a 501 (c) 3 not-for-profit organization that has worked since 1976 to help Israeli youth develop life skills through the medium of sport. The ITC serves over 20,000 children annually, many of them from disadvantaged neighborhoods or outlying development towns throughout Israel. The ITC’s 14 centers stretch from Kiryat Shmona on the Lebanese border in the North to Beer Sheva bordering the Negev Desert in the South. http://www.israeltenniscenters.org.