Collection of Essays and Interviews Spotlights Critical Stage of Career and Complements A New Paperback Edition of STARTING POINT: 1979-1996 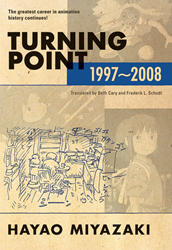 A captivating must-read for any anime aficionado or fan of the entrepreneurial spirit, STARTING POINT and TURNING POINT are wonderful tributes to Hayao Miyazaki, a true visionary’s unending dedication and skill as a master storyteller.

VIZ Media, LLC (VIZ Media), the largest distributor and licensor of anime and manga in North America, has announced the release of TURNING POINT: 1997-2008, an insightful collection of essays, interviews, memoirs, and illustrations from legendary animation director Hayao Miyazaki. The new title covers the critical stage in the legendary director’s career when his animated films such as Princess Mononoke, Howl’s Moving Castle, and Ponyo began to garner a significant international audience. TURNING POINT: 1997-2008 will debut as a hardcover edition on April 8th and will carry an MSRP of $29.99 U.S. / $34.99 CAN.

TURNING POINT: 1997-2008 is the companion second volume to the earlier Miyazaki chronicle, STARTING POINT: 1979-1996, which was originally published by VIZ Media in 2009. This volume examined the first part of Miyazaki’s career, during which he rose from humble beginnings to create the seminal animated features Nausicaä Of The Valley Of The Wind, Castle In The Sky, My Neighbor Totoro, Kiki’s Delivery Service, and Porco Rosso, as well as his launch of Studio Ghibli. A fitting introduction is offered by John Lasseter, the Chief Creative Officer at Pixar and Walt Disney. VIZ Media will release STARTING POINT: 1979-1996 in a new paperback edition on April 8th under the Studio Ghibli Library imprint with an MSRP of $16.99 U.S. / $19.99 CAN.

TURNING POINT: 1997-2008 follows Hayao Miyazaki as his grand vision continued to mature, cinema-lovers worldwide discovered and embraced his creations, and prominent film critics such as Roger Ebert delivered tremendous acclaim for the director’s films. In his legendary career, these crucial years represent the turning point. In the mid-1990s, Miyazaki moved from success to success as his work found a fervent audience outside of Japan. His animated films of the era, including Princess Mononoke, Howl’s Moving Castle, and Ponyo, were internationally lauded, and Miyazaki won an Academy Award® in 2003 for his film, Spirited Away, which was a commercial and critical hit.

“These two memoirs focused on Hayao Miyazaki are extremely insightful and give tribute to the power of animation as an art form,” says Masumi Washington, Senior Editorial Director. “Both STARTING POINT and TURNING POINT offer collections of essays, interviews, and memoirs that go back to the roots of Miyazaki's childhood, the founding of Studio Ghibli and continues with essays and discussions focusing on some of his most popular films, including Princess Mononoke, and Spirited Away. A captivating must-read for any anime aficionado or fan of the entrepreneurial spirit, these new books are wonderful tributes to a true visionary’s unending dedication and skill as a master storyteller.”

Hayao Miyazaki is one of Japan's most beloved animation directors. His first feature, The Castle of Cagliostro, was released in 1979. His film Nausicaä of the Valley of the Wind, based on his own manga, was released in 1984. In 1985 Miyazaki cofounded Studio Ghibli, through which he directed the box-office smashes Princess Mononoke (1997) and Spirited Away (2001), which won the Golden Bear at the 2002 Berlin International Film Festival and the Academy Award® for Best Animated Feature Film in 2003. Howl's Moving Castle (2004) received the Osella Award for technical achievement at the 2004 Venice International Film Festival. In 2005 VIFF awarded Miyazaki the Golden Lion Award for Lifetime Achievement. His other acclaimed films include My Neighbor Totoro, Kiki's Delivery Service, and Ponyo. Miyazaki's essays, interviews, and memoirs have been collected in Starting Point: 1979-1996 and Turning Point: 1997-2008. His final film, The Wind Rises, was nominated for both a Golden Globe and Academy Award®.

VIZ Media will also be releasing a stunning full-color hardcover edition, THE ART OF THE WIND RISES, based on Hayao Miyazaki’s latest and final feature film, on April 8th.